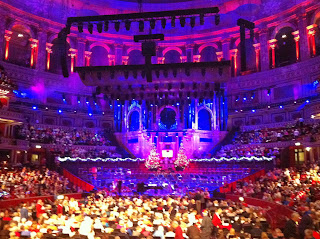 I'd always wanted to see Jonathan Cohen's Christmas Carol Singalong at the Royal Albert Hall, but I was a little worried that it might just be him and a piano with us trying to sing along! However, I needn't have worried, he was helped by the London Concert Orchestra and the London Concert Chorus, and also Laura Tebbutt who had stepped into the soloist's shoes at only a week's notice and was making her first solo performance at the Royal Albert Hall. She was fantastic and what a voice!
The audience dressed up for the occasion in Christmassy jumpers and Santa hats and those in the posh boxes decorated them with fairy lights. There was even a couple with fairy lights on their Christmas tree type hats!
Jonathan Cohen, known for BBC's Playaway  in the 1970s, made sure we all enjoyed ourselves as we sang traditional carols like Once in Royal David's City and classic Christmas songs like Santa Claus is Coming to Town, although we were allowed to sit back and listen to the London Concert Chorus and Laura's magical items. The highlight was when we all danced and raised the roof to I Wish It Could Be Christmas Every Day by Wizzard and Merry Christmas Everybody by Slade.
If you want to get into the Christmas mood, this is the concert for you.
If you can't fit it in this year, or can't wait until next Christmas, Jonathan is doing a Summer Singalong in June!