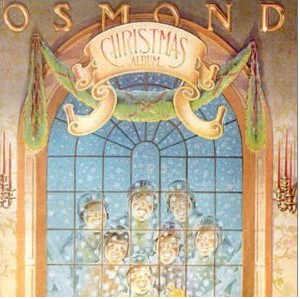 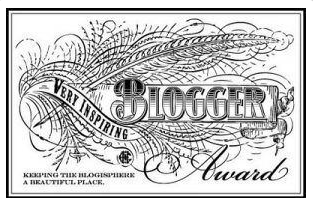 I didn't plan to write another blog before Christmas, but I'm very pleased to accept this Very Inspiring Blog Award from the Very Inspiring Blogger, Rosemary Gemmell!
In accepting this I have to write seven random things about myself, but I thought I'd tell you what my favourite Christmas songs are instead, as it's only four more days to go!

7. All Alone on Christmas by Darlene Love because I love it in Love Actually.
6. Merry Christmas Baby by Bruce Springsteen and the E Street Band - who wouldn't love this?
5. Driving Home for Christmas by Chris Rea. The perfect song when you're driving home for Christmas!
4. Wonderful Christmastime by the wonderful Paul McCartney. Ching, ching, ching. Ching, ching, ching!
3. Fairytale of New York by The Pogues and Kirsty MacColl. Who can resist the boys of the NYPD choir singing Galway Bay? I'm not sure of the rest of the lyrics though!
2. Have Yourself a Merry Little Christmas by Luther Vandross, because it sounds so warm and Christmassy.
1. The Osmonds Christmas Album by The Osmonds. There was once a snowy Christmas TV Special, and this is the album. Fabulous! 'There's No Snow in LA, So Santa Don't Bring Me a Sleigh!
I now have to nominate some more people with Very Inspiring Blogs, so I choose: Jen Black, Rebecca Emin, Angela Bell and Debbie White. Congratulations Ladies!
Posted by Jean Bull at 16:50 2 comments:

Too busy? Would you like to clone yourself this Christmas? Read what happened to Lou Suffern in Cecelia Ahern's The Gift 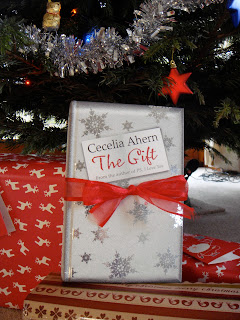 I first read The Gift by Cecelia Ahern back in 2008 when it was published. As you can see, my hardback copy came covered with silvery snowflakes and tied with a bright red bow. Fantastic!
It's a magical Christmas story, that really makes you think about the consequences of trying to do too much and be in two places at once at this time of year.
Lou Suffren, a busy Dublin businessman, is such a person who takes pity on a homeless man called Gabe (yes, I know, but  you'll have to read it!) by giving him a job in the post room. This part reminds me a bit of The Secret of My Success, the 1987 film starring Michael J Fox, but Gabe soon gives Lou the ultimate gift which changes his life.
I can't tell you too much, because it would spoil the story, but I can certainly recommend it as a wonderful book to read at this time of year -  if you can find time!
I wish it could be made into a film. Adam Sandler would be great to play Lou because he played a similar role in Click.
This is probably my last blog before the big day because I'm quite busy myself at the moment!  Happy Christmas!

You Really Must Read The Snow Child by Eowen Ivey! 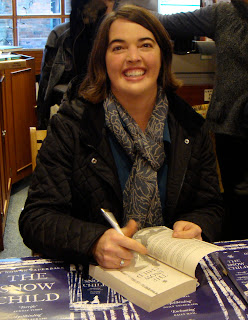 Eowyn Ivey was named after Éowen a 'shieldmaiden' in The Lord of the Rings. She's so glad that they made the films so everyone knows at last how her name is pronounced - rather like Ay-wun! Now you know that, you must read her first novel,  The Snow Child!
I caught up with her on Monday at The Wallingford Bookshop, where she had come all the way from Alaska to sign copies for waiting fans. A bookseller, herself, she was on a mission to visit several bookshops on her 'Snow Day', although at 9.30 am it had only just stopped raining! But as she drove along, she listened to Christmas CDs and Alison, who runs the shop, provided mince pies and other Christmas nibbles.
Now, back to the book itself, the quotes on the cover call it 'Spellbinding' and 'Enchanting', and I have to agree.
It's a fairy story for adults, though I think that young adults would enjoy it too, based on the traditional tale of  Snegudrochka or Little Daughter of the Snow as told by Arthur Ransome in Old Peter's Russian Tales.
In the story, an older couple, unable to have any children, build a little girl in the snow who comes to life.
Eowyn tells this story with beautiful imagery about the barren Alaskan winter, reflecting poor Mabel's sadness at losing a baby, and the joy she and Jack feel when the little girl, who they call Faina, comes into their lives. There are also their neighbours, the warm and friendly, Esther and George, and their son, Garrett, who helps Mabel and Jack, and becomes like a son to them, but who has an impact on the way the story turns out.
It's quite funny that in the first drafts of Gipsy Moth, I also had a childless couple called Mabel and Jack, although I did write Jack out in the end. So in a way I felt quite familiar with them, even if they lived in Devon and not Alaska!
As I said it's a beautiful story, one that I could not put down. A beautiful read for the Christmas holidays, or indeed as a special present for a friend. I loved it!
Posted by Jean Bull at 13:53 3 comments:

My Next Big Thing has Already Been Delivered! 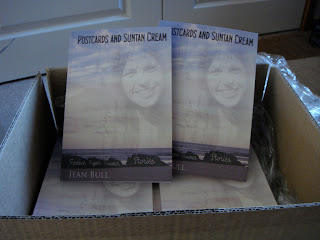 Gwen Kirkwood, author of Scottish family sagas, has invited me to take part in a blog event entitled THE NEXT BIG THING - a series of questions and answers about what’s happening next in my writing life, and actually for me, the next big thing has already been delivered; so here we go!

What is the title of your book?
It’s called Postcards and Suntan Cream.

How did you come by the idea?
It’s a collection of short stories with a summery theme. Postcards and Suntan Cream is the title of the first one, and I thought it would be good for the book itself.

What genre does your book fall under?
A variety. The stories are about women of all ages from young to old. There are romantic ones, thoughtful ones, funny ones and a couple of trips back to the Sixties. That’s why I’ve got another beautifully nostalgic cover by Samantha Groom.

Which actors would you choose to play your characters if it were a movie?
In the Postcards story, I would have Carey Mulligan playing Ellie in the past, and Julie Christie playing her today, but I don’t think she’s anywhere near eighty yet!

What is the one-sentence synopsis of your book?
Twelve super summer stories that you can relax with, whatever the weather.

How long did it take you to write the first draft of your manuscript?
I wrote the stories two years ago, and then came back to them this year to edit them for the collection.

What other books would you compare yours to within your genre?
I enjoyed Loves Me Loves Me Not, the RNA anthology of short stories,
but I can’t compare myself to such great writers!

Who or What inspired you to write this book?
Many things. A lot of the stories are based on my experiences in the hotel industry, and others are based on places I’ve visited. I always keep a holiday diary.

What else about your book might pique the reader’s interest?
There is a ghostly element!

As this has been a very popular blog event, it's been difficult to find someone who hasn't answered the questions already. Therefore, Rhoda Baxter, author of smart romantic comedy, and I are sharing Catherine Miller, a member of The Romaniacs who has had a lot of success with flash fiction and short stories, and she will be taking part next Tuesday, 4th December.
So please visit her blog then, and hear all about her Next Big Thing!