A Family Recipe by Veronica Henry is indeed 'An Utter Delight'

On the cover of A Family Recipe by Veronica Henry, Jill Mansell says it's 'an utter delight', and she's right.
Set in the beautiful city of Bath, it follows Laura whose world has fallen apart because her daughters have now both left for university, and her property developer husband, Dom, is having an affair with his conveyancing lawyer, Antonia.
To make a better life for herself and create an income, Laura decides to rent out two empty bedrooms in the attic on Airbnb and use a box of family recipes, handed down from her grandmother to make some jams and chutneys to sell at the local market.
This is the same box of recipes that Jilly used during the Second World War to feed the family she had taken in because they had lost their home in the Bath Blitz. We find out that Jilly is Laura's grandmother whom, as a child, she named Kanga, and whose name has stuck. Now aged ninety-three, Kanga lives in a cottage at the bottom of the garden of Number 11, having given over the house she inherited from her parents during the war to Laura and her family. The story is also told of her best friend, Ivy, who has supported her through thick and thin throughout their lives.
Veronica Henry cleverly draws parallels and differences between Laura's and Kanga's stories, told seventy-five years apart, and it is a novel of love, loss, happiness and heartbreak which is indeed 'an utter delight'!
Posted by Jean Bull at 07:00 2 comments:

The Wildflowers by Harriet Evans - A Really Enjoyable Clever Mystery 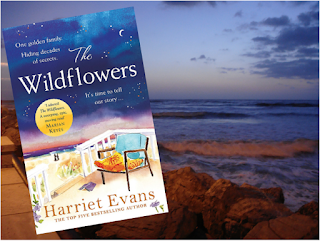 Harriet Evans is a cracking good storyteller and she had me intrigued from the very first page of The Wildflowers with the story of The Bosky, a mysterious ramshackle beach house in Dorset , and the family who owned it, the Wildes, who spent idyllic summers there in the 1970s.
I wanted to know was it really so idyllic? Why did the family suddenly stop coming and what was it that brought them back forty years later to put all their family secrets to rest?
The characters are beautifully drawn too: with Sir Anthony Wilde who first came to the Bosky as a boy in the war with strange Great Aunt Dinah, (after he'd been rescued from the rubble of his house where his mother had been killed in a bombing raid) and who became a famous Shakespearian actor, and his wife, Althea, also an actress,  on a Sunday night TV drama, and their unconventional marriage with many other partners, some of whom would visit The Bosky during those hot August holidays.
They had two children, Benedick and Cordelia, known as Ben and Cord, who used to play with a strange girl called Madeleine, who came each summer with her repressive father to stay nearby. Mads keeps a diary the happenings at The Bosky which she keeps hidden under the floorboards of the porch and takes out each year.
The story is also told from Cord's point of view when she overhears a shocking secret, and distances herself from her family to pursue a career as an opera singer.
This is one of those really enjoyable clever mysteries, you want to read again to pick out all the clues. Fabulous!