Newbury Show - A Great Place for Historical Research and Inspiration for Writers! 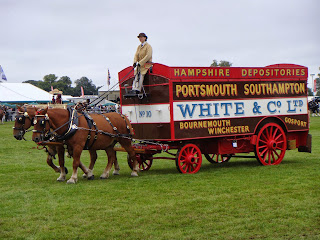 I've just spent another great day at the Newbury show or more correctly, The Royal County of Berkshire Show. We've been going for twenty years, so it must be good!
There are always fascinating things to see such as these Heavy Horse Trade Turnouts. Just imagine moving house and loading everything into this removal van. What could go wrong on the journey from Bournemouth to Winchester, for example? Or perhaps the story could be told from the horses' point of view? 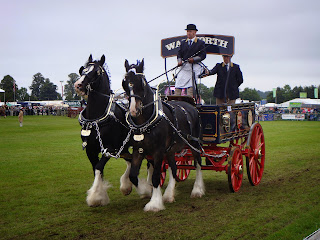 Drays like this would deliver beer from the local town brewery to all the pubs in the area. Imagine the draymen unloading the wooden barrels and rolling them down through the trapdoor in the pavement to the cellar beneath the pub. 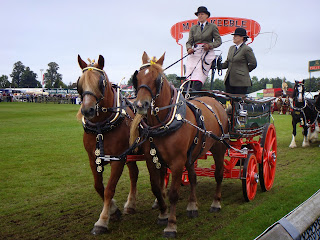 This cart had an agricultural use as well as a trade use. The axels are wide enough to be drawn across a field in the furrows where farm workers would load it up to the name plate behind the driver's shoulders with cabbages and other brassicas. Then it would be driven straight to Covent Garden for the vegetables to be sold and the cart would make a return journey with supplies from London for the village.
Who could be waiting for a special package to be brought home? 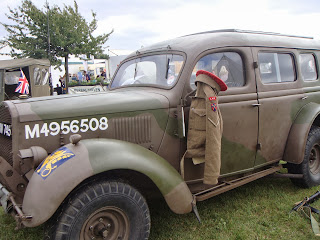 This year there was also a World War II Village to give a glimpse of life on the Home Front. 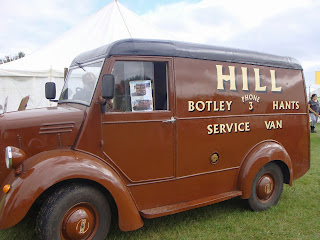 This van really reminds me of Dad's Army!
Both these vehicles must have some stories to tell. 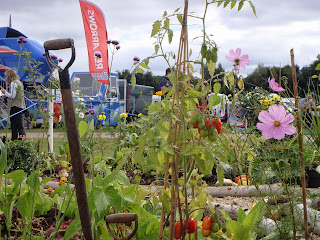 Here is a reconstruction of a Dig for Victory garden. There were Land Girls on hand to explain  how important food production was when Britain had to rely on its own resources for food. There could be a story where people are competing to grow the best marrow. The winning one gets stolen, and the village have to find the culprit before it's eaten up! 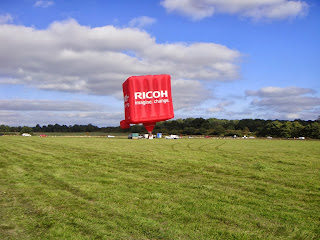 The show always ends with a mass assent of hot air balloons, and here is the first one which is rather an unusual cube shape. An idea for another story perhaps? Someone's first balloon flight and the balloon gets out of control and comes down in a farmer's field or maybe a shopping centre car park!


Newbury Show is the last county show of the season, but they start again next spring. Look out for your local one and see if you can get some inspiration for your writing like me! 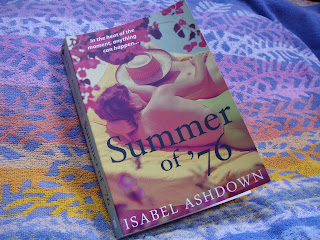 The Autumnal Equinox is officially at 20.44 GMT on Sunday, 22nd September, so you have a weekend left to read this novel about the hot Summer of '76 by Isabel Ashdown! On the other hand it can be enjoyed anytime when you want to remember the halcyon days of this summer, perhaps when the autumn winds are blowing or it's snowing in January!
It's a coming of age story set on the Isle of Wight, about seventeen-year-old Luke, his family, and friends during that long hot summer of 1976.
In some ways it's like The Age of Miracles by Karen Thompson Walker where the heat affects everyone's behaviour which I reviewed recently.
As Diana, one of Isabel Ashdown's characters says:
'It's the heat; the endless summer. We live on this tiny island, and no one knows what to do about the sun when it just won't stop shining, so we all go a little mad, because it feels it's just a dream that will be gone when we wake up tomorrow.'

Luke is spending his last summer on the island before he goes off to Brighton Poly, working at the campsite with Samantha whom he fancies, and helping his friend Martin with his problems, but under the surface of all this fairly normal story is the scandal that is gripping the town, and the part that Luke and Martin play in uncovering the truth.
It is a gripping read, and Isabel has drawn a picture of life in the mid-seventies very well. It is always difficult to write about a time well within living memory and she has captured the era perfectly right down to Luke's favourite pudding made from shop bought swiss roll and custard!
I thoroughly recommend this book and I will be looking out for her other ones.
Have you read any of Isabel Ashdown's novels? 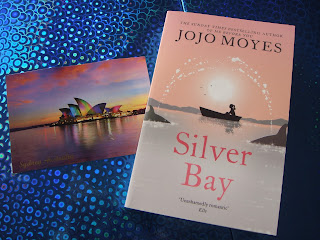 Silver Bay  is another fabulous novel by one of my favourite authors,  Jojo Moyes.
So good, it was shortlisted for both the RNA Novel of the Year and the Good Housekeeping Book of the Year in 2007!
It's set on a fictitious part of the Australian coast about three or four hours' drive north of Sydney where 'whalechasers' take tourists out to marvel at whales and dolphins, but where big business is out to develop this haven and, change it for ever.
The story is told from the points of view of the main protagonists: Kathleen, a shark catcher in her youth, but now in her seventies and running the old Silver Bay Hotel; Liza, her niece, who has escaped to the safety of Silver Bay; Liza's daughter, Hannah; Greg, Yoshi, and Lance the 'whalechasers';  and Mike Dormer from England who turns up and threatens to spoil their idyll. They are so well drawn that I could imagine sitting on the bench outside the Silver Bay Hotel with them each evening, eating chips and drinking beer, as the story unfolds.
This novel explores love, of course: not only romantic love, but also the love of a mother for her daughter, and an aunt for her niece and what happens when this is stretched to the limit.
It's such a moving and surprising book; one of those where you can't wait to read to the end, but are sad when you get there and you have to close it and admire the cover, wishing for more.
Never mind, there are still three of Jojo Moyes' books that I haven't read to look forward to! 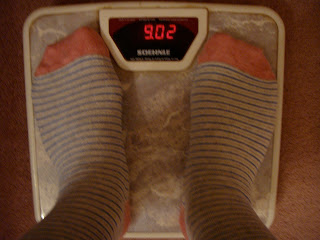 Back to school!
People are beginning to say that September is the new January with the beginning of the new school year and promises to lose weight or take up more exercise or a new hobby.
I've been trying to lose a few pounds this summer, but I wasn't trying very hard and nothing happened: too many tempting things to eat and drink!
But a month or so ago, I thought I would try harder and cut down at lunchtime, because breakfast and dinner were generally ok. So I got some Ryvita and cottage cheese which I ate with some lettuce, tomato, cucumber and red pepper - delicious and satisfying! I was so pleased to have lost one and then two pounds, that it encouraged me not to be so tempted by biscuits, cake and chocolate and keep it up. 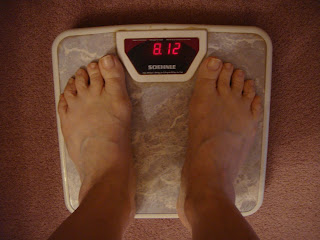 Isn't that like writing? I find it's easy to put it off if I'm not under any pressure to write. There are too many nice distractions like the Internet! But when I do get stuck in and make some progress, it encourages me to keep going. After all, I've come this far and it's beginning to come together.
Good Luck with your writing: I'd better get on with mine!
Posted by Jean Bull at 16:13 4 comments: