Discover Many Interesting Facts About Shakespeare with Bill Bryson 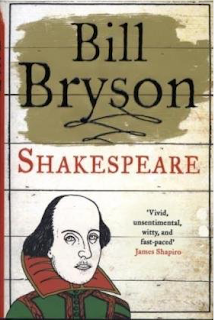 This is an immensely readable account of the life of William Shakespeare, as you would expect from such a conveyor of interesting facts as Bill Bryson.
However, even he hasn't got a lot to go on!
The blurb from the back of my 2007 edition quotes Bryson and says:
'On only a handful of days in his life can we say with absolute certainty where he was.'
Also, there are also only three possible likenesses of the great man, all made after his death!
Nevertheless, the book, at just short of two hundred pages, takes us through Shakespeare's life, illuminating it from what can be gleaned from the social history of the period.
Bill Bryson pieces together what the original Globe theatre must have looked like, and what life was like for the actors and indeed the people of London where theatres were shut for months on end because of continual outbreaks of the plague.
He also attempts to discover something about Shakespeare's relationship to his wife, Anne Hathaway, to whom he famously left his second-best bed!
And, of course, Bryson examines his plays, discussing in which order they were written, and whom, if anyone, he collaborated with, and whether the glover's son from Stratford-upon-Avon even wrote them at all.
I don't think that Shakespeare scholars would find much that they didn't already know, but for the average person, keen to find out a little more about the Bard in an interesting and amusing way, it is well worth reading it, especially now, in 2016, we are celebrating four hundred years since his death.
However, for those whose interest is sparked, there is a good biography at the end for further reading.

You can buy Shakespeare by Bill Bryson here.

My Summer Reading List - Gorgeous books to be read this summer! 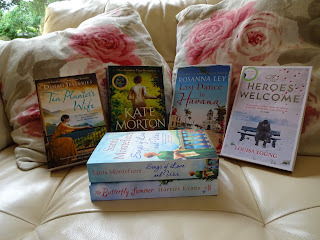 Here are my gorgeous books to be read this summer!
And here's why I've chosen them (in no particular order!).
1. The Tea Planter's Wife by Dinah Jefferies
I've chosen this because I love the sweeping romantic novels set in exotic places that Rosanna Ley writes so well, and I'm hoping that this one set in Ceylon in the 1920s and 1930s with its powerful themes of love, loss, and secrets revealed will do the trick.
2. The Lake House by Kate Morton
I've already enjoyed two books by this author, The Secret Keeper and The House at Riverton, so I'm looking forward to reading it. The blurb states: A missing child; an abandoned house and an unsolved mystery. Perfect! I can't wait!
3. Last Dance in Havana by Rosanna Ley
If you've been following my blog, you'll know how much I love Rosanna Ley's novels; I've read four in the past year! So I'm looking forward to reading this one set in Cuba and England from the 1950s to the present day, and enjoying Rosanna's skill at combining place and the action of the story. This one should be Hot! Hot! Hot!
4. The Heroes' Welcome by Louisa Young
I read My Dear I wanted to tell you four years ago, and was moved by the story set in the First World War about how the war affected the soldiers fighting in it and how it affected those at home.
This one is the sequel, and looks at the life of the couples after the soldiers have returned. I am especially interested because my father was a soldier who returned, but whose life was never the same.
Louisa Young is the granddaughter of Kathleen Scott, the widow of Captain Scott of the Antarctic, and her first book, A Great Task of Happiness, was a biography of her grandmother's colourful life which I'm looking forward to reading as well.
5. Songs of Love and War by Santa Montefiore
This is another of my favourite authors, and I have read nearly all of her books. Songs of Love and War is another sweeping story set in Ireland and is the first of a trilogy, so that will be wonderful to see what happens next. It follows three girls whose lives are affected by the First World War and the Irish Uprising. I'm looking forward to it because Santa Montefiore is another writer who can combine setting, characters and story to produce a really absorbing novel.
6. The Butterfly Summer by Harriet Evans
Another favourite author! I remember her telling the story at the London Book Fair a few years ago how, working at a publishers, she submitted her first novel, Going Home, under a pseudonym and was delighted that it was accepted!
This book is about Keepsake House in Cornwall and the romantic and dangerous secrets that is holds. Another epic read!

I hope that you might find something here to try too. Happy Summer Reading!
Posted by Jean Bull at 08:00 No comments: 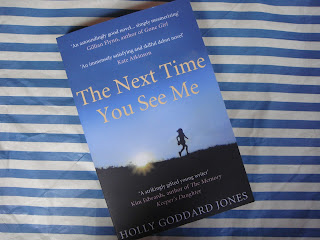 The Next Time You See Me is Holly Goddard Jones' first full length novel, although she has already been acclaimed for her Girl Trouble collection of short stories.
This mystery thriller is set in the fictional Roma, Kentucky, where the lives of the characters who live in this small American town are changed for ever by the discovery of a body in the woods below Harper Hill by thirteen-year-old, Emily Houchens. 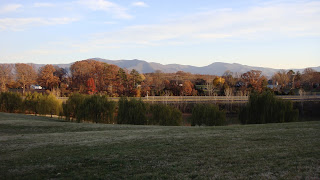 Emily admires Christopher Shelton, a boy in her class at the middle school, but he calls her a creep.
Their teacher, Susanna Mitchell, keeps him in because of his arrogant insolence over some work he hasn't completed.
Meanwhile, Susanna is worried that she hasn't heard in days from her wayward sister, Ronnie.
Tony Joyce is the detective on the case, and he revives the feelings that Susanna had for him when they were at school but could not reciprocate because he is black.
Wyatt Powell is a middle-aged loner who is taken out to a bar by his workmates just to get him drunk and leave him with the bill, and Emily's father, Morris Houchens, is the only one from work to be kind to him and look after his dog, Boss, when Wyatt has a heart attack.
Lastly, there is Sarah, a nurse in her early forties who has never married and meets Wyatt in the bar and later cares for him in hospital.

Is the body Ronnie's? If so, how did she die? Who is the killer?
What did Emily see Christopher and the popular Leanna doing by the tennis courts?
Will Susanna leave her bandleader husband, Dale, for Tony Joyce? And what will happen to their daughter, Amy?
What has Wyatt got to do with Ronnie's disappearance?
And should Sarah follow her heart?
All these questions are answered by Holly Goddard Jones in a compelling way that makes you keep reading on to find out the truth. I like her economical style; it's very visual and I can imagine the characters interacting as they play out the story, and I would certainly like to read some more of her work.

The Next Time You See Me is available from Amazon via this link.

Email ThisBlogThis!Share to TwitterShare to FacebookShare to Pinterest
Labels: 'Girl Trouble', 'Holly Goddard Jones', 'Kentucky', 'murder mystery', 'The Next Time You See Me'

Looking for adventure in Morocco? Follow The Saffron Trail with Rosanna Ley 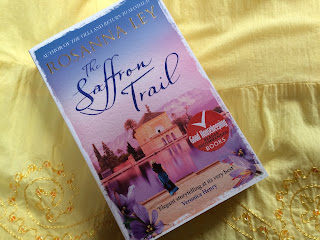 Reading The Saffron Trail by Rosanna Ley is the next best thing to packing your bag and heading for Morocco!
The setting of the story is always an important ingredient in Rosanna Ley's novels, and this one is no exception where the heat and the bustle of the souks in Marrakech reflect the conflict and confusion in the minds of the main protagonists, Nell and Amy, and the saffron field in Cornwall  reflects the peace that Nell's mother tries to find and maintain.
The story begins one night when Nell's mother walks over the Cornish cliffs to her death. She hasn't replanted the saffron corms on her farm this year. Nell can't understand why and wonders if it was because she planned to die.
Nell meets Amy at a cookery school in Marrakech. She's been sent by her husband, Callum, to get over her mother's death and to learn about the cuisine so she can open her own restaurant. Amy has been sent on an assignment by her boss to take photos of Moroccan life for an exhibition. She is also trying to trace, Glenn, her great aunt Lillian's son, who ran away instead of being drafted to Vietnam in the sixties, and whom Lillian hasn't seen since. All she has is a postcard from Morocco.
So follow Nell and Amy on the adventure of their lives as they follow their own saffron trail. Discover how the rift between Lillian and Mary changed the sisters' lives for ever. Find out what happened to Glenn and see if he ever returns to his ageing mother, and the reason why Nell's mother took that last walk over the cliffs.
It's a wonderful novel, and it makes me want to pack my bag and head for Morocco one day myself!

The Saffron Trail by Rosanna Ley is available here.

Rosanna's new novel, Last Dance in Havana, set in Cuba, is also available here. I can't wait to read it!
Posted by Jean Bull at 08:00 2 comments: