The Heroes' Welcome by Louisa Young - A Moving Story About Life in the Aftermath of the First World War. 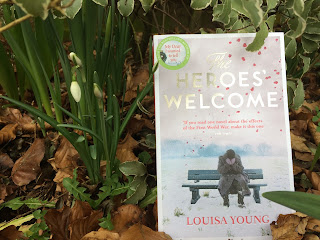 It's five years since I read My Dear I Wanted to Tell You by Louisa Young, and the story of the men and women caught up in the First World War both in France and at home, has stayed in my mind, especially as my father fought in the Great War when not much more than a boy, and although he returned, suffering physical wounds far less severe than Riley's, his life was never the same.
The Heroes' Welcome takes up the story of Riley and his girlfriend, Nadine, as they marry in March 1919, with Peter, his Commanding Officer, and Rose, Peter's cousin who had nursed Riley, and Peter's son, Tom, in attendance. The fact that Peter's wife, Julia, is not there illustrates the strain their marriage is already under after the war.
Louisa Young quotes a passage from The Odyssey about a wife so relieved to see her husband again she feels like a shipwrecked sailor reaching land. Julia wants to rekindle their love and take up where they left off, but Peter has his own problems dealing with the fact that so many of his men were lost.
Riley and Nadine too have their problems coming to terms with Riley's injuries which get in the way of the joy of their marriage, and the reaction of their families to their wedding.
This book is worth reading too for Louisa's ability to get right into the heads of her characters as they journey forward through 1919, trying to put the war behind them but, like Peter, unable to talk about their experiences. She also graphically illustrates the reaction of society to the injured: there was not a heroes' welcome waiting for them all. 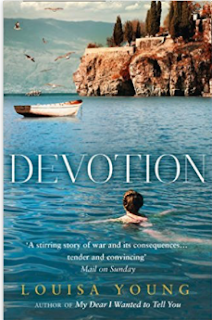 I'm pleased to say that Devotion, Louisa Young's next book, set in 1930s Italy will be released on April 6th.

This continues the story of Tom Locke, Peter's son, and I can't wait! 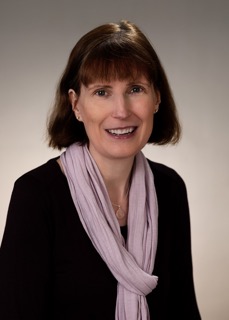 Hello Jen, and welcome to my blog. It’s lovely to have you here today to talk about your debut novel, The Cottage at Firefly Lake (Grand Central, Forever, January 2017).

Thank you for inviting me to visit, Jean. I’m delighted to be here to talk about my first book with you and your blog readers. 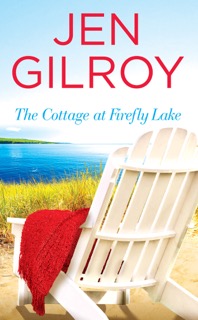 Some mistakes can never be fixed and some secrets never forgiven . . . but some loves can never be forgotten.
Charlotte Gibbs wants nothing more than to put the past behind her, once and for all. But now that she's back at Firefly Lake to sell her mother's cottage, the overwhelming flood of memories reminds her of what she's been missing. Sun-drenched days. Late-night kisses that still shake her to the core. The gentle breeze off the lake, the scent of pine in the air, and the promise of Sean's touch on her skin . . . True, she got her dream job traveling the world. But at what cost?
Sean Carmichael still doesn't know why Charlie disappeared that summer, but after eighteen years, a divorce, and a teenage son he loves more than anything in the world, he's still not over her. All this time and her body still fits against his like a glove. She walked away once when he needed her the most. How can he convince her to stay now? 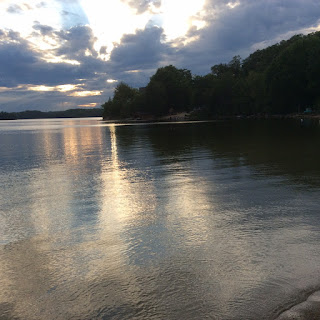 The Cottage at Firefly Lake is set in Vermont, a state renowned for its beautiful lakes and mountains. Can you say why you chose a lake as the setting for your first novel?

The Cottage at Firefly Lake celebrates everything that’s wonderful about a summer holiday by a lake with a small town nearby. I had many such summers growing up and, after a succession of damp and cool English summers, subliminally I think I wanted to recreate the idyllic summers of my memory in fiction!

I set the book in Vermont’s Northeast Kingdom, a special, unspoiled corner of the state where my husband and I spent several happy vacations. 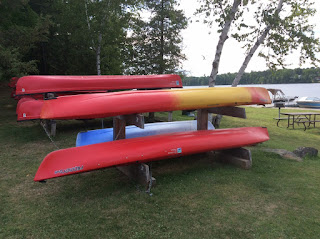 In your novel, there are many parallels between the stories of Sean and Charlotte, and his son, Ty, and Naomi. Did you find it easy to step into the shoes of these teenagers to write their story?

When I first started writing, I tried young adult fiction, only to discover it wasn’t my niche. However, I still love writing young adult characters, possibly because I remember so vividly what it is like to be that age.

I also read young adult romance so that helped me ‘step into the shoes of…teenagers.’ 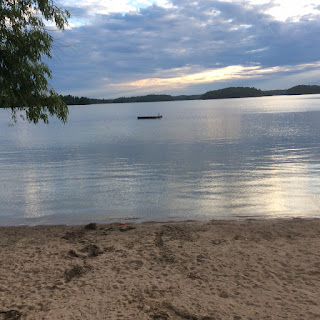 Charlotte, for various reasons in the story, left Firefly Lake when she was eighteen to be a war correspondent. Did you draw on your own experiences of leaving Canada to work in Europe?

Although I wasn’t consciously aware of it at the time, my experiences as an expatriate did shape some aspects of Charlotte’s experience. Unlike Charlotte, I always maintained strong ties to North America, but in her case I wanted to explore the pull of home for someone who spent her adult life cutting ties with the past and a place and people she once cared about.

Having spent much of my life living outside my home country, questions of home—what it means, and how and where we find it—run through both The Cottage at Firefly Lake and everything I write. My author tagline is even ‘Romance to bring your heart home.’ 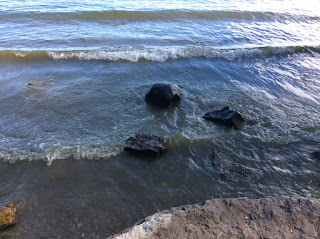 Sean has a twin called Trevor who’s a good friend too. Do you have any twins in your family to draw upon for their experiences?

There are no sets of twins in my immediate family, but I’ve always been fascinated by the twin relationship, possibly because there was a set of twins several years below me at school who were the focus of considerable attention.

To write about Sean and Trevor’s relationship, I read about twins and also talked with my husband who has three brothers very close in age. Apart from the twin bond, I wanted to depict a close relationship between brothers—the love, but also the teasing and male rivalry. 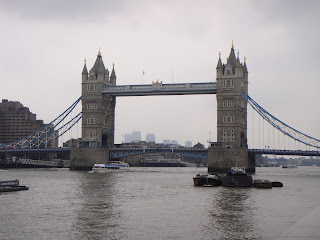 Has most of your writing been set in North America, or have you tried writing stories about your time in the UK?

I lived in the UK for a long time and consider England my second home. However, when I started writing seriously towards publication, I recognised early on that I have a North American writing voice.

For a time, I belonged to a writing group in England and, in that context, I did try to write stories set in the UK and featuring British characters. However, my dialogue was stilted and plots contrived.

Although I don’t rule out writing about my time in the UK, for now writing from my heart means setting stories amongst the people and places that first influenced me.

You belong to the RWA in America and the RNA in the UK where we both attend the Reading Chapter. How would you describe the different approaches to romance writing on each side of the Atlantic?

As I see it, the primary difference is size and, to some extent, related organisational culture.

I came through the RNA New Writers’ Scheme (NWS) and without the supportive critiques I received via the NWS, I don’t think I’d be a published author now. Compared to Romance Writers of America, the RNA is small and for that reason, has a cosier, more intimate feel, at least to me.

However, I also owe much to RWA. It has a highly developed online learning programme I’ve benefited enormously from, and its large chapter network offers excellent contests that give unpublished writers feedback and, as a finalist, visibility. Under a previous title, The Cottage at Firefly Lake was a finalist in RWA’s Golden Heart® contest in 2015. That experience changed my life and introduced me to a wonderful and supportive community of fellow finalists, now writing ‘sisters.’

Although some romance publishers (e.g. Harlequin/Mills and Boon) produce different covers for books published simultaneously in the UK and North America, when it comes to actual romance writing, I think the two markets are quite similar. As romance authors, and irrespective of geography, we have the same goals—to create characters and stories that evoke an emotional response in our readers and deliver the happy endings they expect. 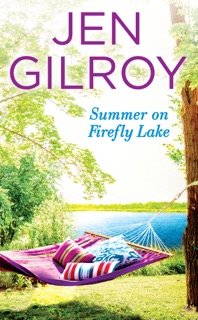 The Cottage at Firefly Lake is the first of a trilogy, which I’m really looking forward to reading! Will we find out more about Charlotte and Sean or will you be concentrating on other the characters in your book next time?

I’m so pleased you’re looking forward to reading the other books in the series. While each book stands alone and can be read independently, there is also continuity between them with recurring characters and, of course, a common setting.

The next book, Summer on Firefly Lake is released on 27 July 2017 in the UK and tells the story of two characters, Mia and Nick, who are introduced in The Cottage at Firefly Lake. Although not main characters, you will certainly find out more about Charlie and Sean in the second book.

The third book, Back Home at Firefly Lake, will be released in March 2018. Once again, previous characters reappear to give readers glimpses of their ‘happy ever after,’ as well as life in Firefly Lake.

Thank you for answering my questions today, Jen, and good luck with this and your future books.

Thanks so much, Jean. It’s been my pleasure to chat with you.

The Cottage at Firefly Lake can be purchased in either mass market paperback or e-book from all online platforms including Amazon UK http://tinyurl.com/hner7s3

And, as I said, Summer on Firefly Lake will be available in the UK from 27th July from the above including Amazon UK http://tinyurl.com/hoexomz