For a Monumental, Epic Read Try The Butterfly Summer by Harriet Evans 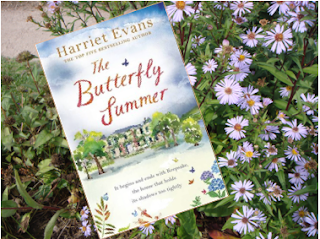 In my Summer Reading List, I described this book as an epic read, and it certainly is!
The Butterfly Summer by Harriet Evans tells the dual stories of Nina Parr, who inherits Keepsake, an old crumbling house in Cornwall, and of her grandmother, Thea, and the curse that has that affected all the Parr women since the first Nina Parr bore Charles II's child.
In 2011, on the second anniversary of her divorce from Sebastian, an old lady at the London Library scares Nina by seeming to recognise her. She tells her she knows her father is not dead, and she tells her about Keepsake, a house which seems vaguely familiar. This is just the beginning of a roller-coaster ride where Nina finds out the truth about her family and the legacy of Keepsake.
Seventy-three years before to the day, Thea finally leaves Keepsake for London, escaping with the help of her friend, Matty, to get away from her cruel father after her mother's death. Thea's life is told in the from of a story which she writes down, called The Butterfly Summer, telling of her life that last summer before the war. 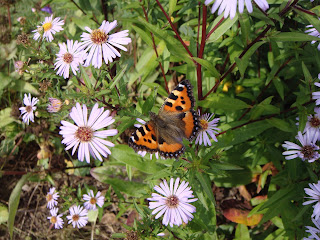 Harriet Evans draws the characters, and describes London and Keepsake so well that I was entirely drawn into the modern story of Nina and her American mother, Delilah; George, her father, a lepidopterist (butterfly expert!); Mrs Poll, who lives upstairs and helps look after Nina as a child, and Sebastian, Nina's ex-husband, and his insufferable mother, Zinnia, and also the Thirties story of Thea, and the people she meets in London: Michael and Misha, Russian émigrés who give her a job at the Athena Press, and Al who lives upstairs in the same building.
The other element is the theme of butterflies. Apart from the butterfly garden and butterfly house at Keepsake, hidden down by the Helford River, there are the ideas of freedom, capture, and metamorphosis.

It is a monumental story, in turns: intriguing, mysterious, romantic, shocking, magical, dramatic, compulsive, frightening, violent, tragic and uplifting. In short, I couldn't wait for a minute to sit down and read some more, and I was very sad when I came to the last page and had to close the book for the very last time. I think that I might well read it again! 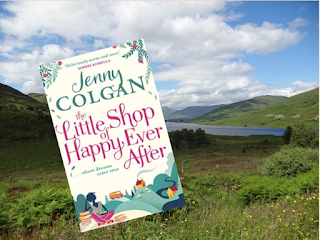 I've just been lucky enough to visit Scotland for the very first time, and a friend, knowing how much I love to read a book set in the country I'm visiting, recommended The Little Shop of Happy Ever After by Jenny Colgan, and I really enjoyed it!
This photo is of Loch Ard in The Trossachs, but the story is actually set further north which I think maybe the destination for another trip for me over the Border!
It's a wonderful, magical tale of Nina who's made redundant from her safe job in a Birmingham library, and ends up, after a team-building exercise she and her colleague, Griffin, are sent on, deciding that the thing she really wants to do is buy a van and open a travelling bookshop.
However, the only van she can afford with her redundancy money is in Kirrinfief in the Highlands of Scotland! Her housemate and good friend, Surinder, thinks she is mad, but can't wait for Nina to take away all the unwanted library books she's been hoarding.
Having bought the van, she tries to drive back to Birmingham to pick up her stock of books, but ends up getting stuck on the rails in front of an approaching goods train. This results in a tender sweet romance with Marek, one of the drivers.
Nina finds a restored barn to live in, owned by a grumpy farmer, called Lennox. His soon-to-be ex-wife has done it up, but he only charges Nina a low rent because he can't stand the sight of it. However, when Nina helps him to deliver twin lambs, she discovers his kinder side, and maybe begins to see their relationship in a different light.
The whole story is played out in the clean air and fresh green Scottish hillsides with the sea twinkling in the distance and entertaining characters. It's magical, too, because Nina builds ups her business by recommending the perfect books for her customers in the way that Vivienne does in Chocolat by Joanne Harris, which helps them come to terms with their problems.
I can certainly recommend this summer read!