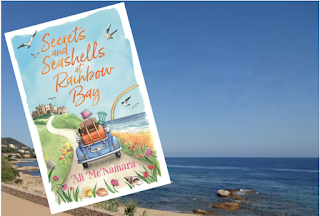 It's not too late on this Bank Holiday afternoon to get Secrets and Seashells at Rainbow Bay on your Kindle and lie back and enjoy Ali McNamara's magical story.

Amelia is amazed to have inherited Chesterford Castle, set on the Northumberland coast, plus an earldom for ten-year-old Charlie!
Although there are live-in staff like Arthur and Dorothy, the butler and the housekeeper, she is also helped by Benji, the genealogist that tracked her down and Tom who arrives to help restore some antique furniture, and some spooky goings-on!

But, there are not many visitors to play the bills and keep the castle afloat.
So how can Amelia get the business on track and save the castle for the local people and posterity?
Also, can she put her own life back together after her husband has left her and Charlie to fend for themselves? Perhaps she needs a little summer magic to find her own Prince Charming?

I really enjoyed this book, and it is perfect to read on holiday, or in the garden under a shady tree.

When Two Books Give You Lemons - Which One Should You Read? 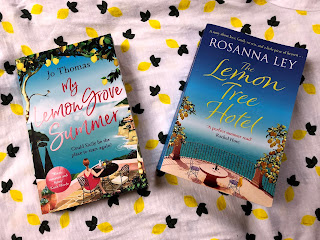 These fabulous books came out this summer, written by two of my favourite authors:   Rosanna Ley and Jo Thomas. The covers look so similar - a table on an Italian terrace overlooking the blue sea, surrounded by lemons, and both are recommended by well known romantic novelists, but would these stories be as good as they look? Which one should you read?

I decided to read The Lemon Tree Hotel first and find out. This is a family story of three generations running The Lemon Tree Hotel in Vernazza, in the Cinque Terre, which I visited a few years ago.
It focuses on Chiara, who is fifty-nine and who inherited the hotel from her parents who opened it to save the buildings of an old convent which had been left in a state of disrepair; her daughter, Elene, who is in charge of the kitchen, and her daughter, Isabella, who has been to business school and helps her grandma with running the rest of the hotel.
There is also Aunt Giovanna who's in her eighties. She's not really an aunt, but was saved by Chiara's parents when the convent closed and now lives in a cottage in the grounds.
Life is going smoothly (although there is a widening rift between Chiara and Elene about how to run the hotel!) until the day that two new guests, Dante and Ferdinand, arrive separately and shake up everyone's lives.

Then, I settled down with My Lemon Grove Summer. At college, Zelda and Lennie made a pact that if they hadn't found anyone else by the time they were forty, they would marry each other. So here they are, part of a group of people promised a new start in Sicily with subsidised rents and a relocation fee, arriving in Città d'Ora to find the town is all run down because no tourists ever stop there on their way to Mount Etna. And their homes aren't ready to move into either!

Giuseppe, the mayor, who has invited them to Sicily, lets them stay in his family's farmhouse surrounded by lemon groves for the time being,  but the group is not made welcome in the town.
So on one side, there is Zelda and Lennie; Tabitha, a wannabe journalist; Barry, an ex-postman, Ralph, an ex-city banker and Sherise and Billy, ex-dairy farmers, and on the other: Romeo, who has the town under his control, and his brother, Matteo, the builder.
Although, Giuseppe, their cousin, is trying to make things work, what the town needs is something to pull it together, and will Romeo's son, Luca, the gorgeous restauranteur, be the one to help the hapless Brits?
And what about the wedding that tradition in the town says is needed to appease the rumbling Mount Etna? Are Zelda and Lennie ready for it?

These are wonderful stories of romance, sunshine and lemons in Italy. The cast of characters in both are perfect, and each book really explores life in its own region and, the loves and relationships of the people who live there.
So if books give you lemons, I say read and enjoy both of them! Perhaps with a glass of limoncello?
Posted by Jean Bull at 19:36 No comments: