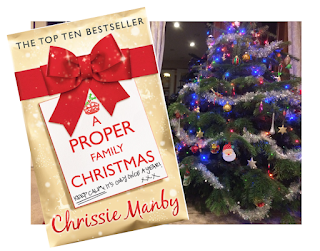 Merry Christmas!
I hope that you will enjoy A Proper Family Christmas by Chrissie Manby as much as I have!
It's the third book I've read about the Benson family, and although Christmas doesn't come until the last chapters, it's a wonderful heart-warming story that made me laugh and cry. 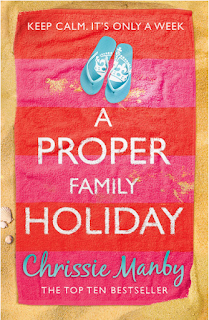 Following A Proper Family Holiday (which I reviewed here), it follows the story of Annabel Buchanan whose privileged life is the polar opposite of the Benson's. However, when her daughter, Izzy, becomes dangerously ill, the hunt is on for a kidney donor. Annabel and her husband are unable to donate because he has high blood pressure and she, at the age of forty-three, has become pregnant again, so she is forced to tell him the secret she's kept from him throughout their relationship: she was adopted at birth. Of course, this leads to Jacqui Benson, the young girl who gave up her daughter, Daisy, all those years ago.
Jacqui eventually married Daisy's father, Dave, and they went on to have two more daughters, Ronnie and Chelsea, who appear in all the books. Ronnie has been in a relationship with Mark for sixteen years and they have a daughter, Sophie, aged fifteen, and a son, Jack, aged six. The Bensons are completed by Granddad Bill, Dave's father, now in his eighties, confirmed to a wheelchair, and losing his memory, which does not stop him getting up to mischief with his great-grandson, Jack.
This noisy, fun-loving and affectionate family have already unknowingly visited Annabel's house on an open day which resulted in Jack knocking down a suit of armour, and Sophie mistakenly being accused of trying to steal Izzy's new black velvet dress so, when they all eventually meet, sparks fly.
Chrissie Manby tackles issues which may face any family at any time of the year with a warm-hearted and sensitive approach: adoption; from the points of view of both the birth mother and the child; kidney donation; and the problems of living with an elderly relative, making this a very satisfying read.

Her other two books about the Bensons are: 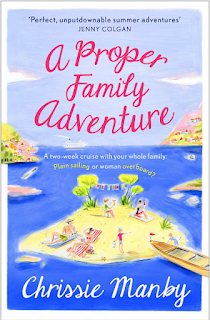 A Proper Family Adventure when Granddad Bill actually does win the Lottery (a running joke, because he always says he feels as if he has when he's happy) and treats the family to a Mediterranean  cruise. It's interesting that a supporting, but important, character in A Proper Family Christmas also turns up in this one too. Here is my review. 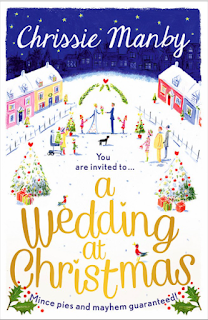 A Wedding at Christmas I've just bought this one! It's about Chelsea's wedding. It takes place at Christmas. What more could you want? Perhaps just a mince pie and a glass of mulled wine by a roaring fire?!
Posted by Jean Bull at 15:24 1 comment: