Letters from Lighthouse Cottage - Another Magical Book by Ali McNamara - Great for the Bank Holiday! 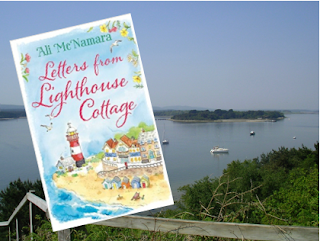 I really love Ali McNamara's magical books, melding the films Notting Hill with Love Actually or Four Weddings and a Funeral, and also, the wonderful Step Back In Time with a Beatles theme which I reviewed here a couple of years ago. Letters From Lighthouse Cottage is quite magical too.
At the age of fifteen, Grace Harper discovers an old Remington typewriter when she helps her mother with a house clearance at Lighthouse Cottage in Sandybridge, Norfolk.
The typewriter isn't any old machine: when Grace is not there, it types letters to her to guide her through her life. These messages are a bit cryptic, but she follows them as best she can. Sometimes things do go wrong, and she wonders if she's right to trust in what they say.
As in Step Back In Time, we follow Grace through different decades from 1986 to the present, and Ali is great at developing Grace and her friends' characters through their dialogue as they grow up, as well as slipping in interesting snippets of information to illustrate the times they live in. At the heart of the story is the eternal love triangle between Grace, Charlie and Danny.
She meets Charlie, a new boy to the seaside town, on her way to Danny's football party. She's desperately keen to be noticed by Danny who goes to her school, and attends his party even though she hates football. Charlie goes along too. He also hates football, but wants to make some new friends.
Remy, as Grace calls the typewriter, tells her that the person who calls her 'Gracie' will be her 'true love', but Charlie calls her Gracie and so does Danny!
The story continues through the ups and downs of their lives, with Remy giving Grace advice, and it's not clear until the very end which one she will chose.
It's a lovely, feel good story to read on the beach this Bank Holiday with the sand between your toes, the warm sun in the sky and the sea splashing on the shore. I loved it!

(Ali describes the lighthouse as plain white in the book, although the cover illustrator has used artistic licence and made it red and white striped! So I wonder if it looks like this one in Hunstanton?)