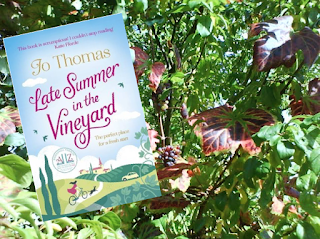 Jo Thomas' books are so interesting that with her, I've learned how to cultivate oysters in The Oyster Catcher; olives in The Olive Branch and now wine in Late Summer in the Vineyard! Although nobody could ever hope to make wine from the wild grapes in this photo, Emmy Bridges, heroine of Jo Thomas' new novel, proves that with determination anything is possible.
Emmy has a dead-end job at Cadwallader's call centre, and by accident is included in a twelve week trip to France to learn all about wine so she can sell it over the telephone. The other employees who go with her: Nick, Candy and Gloria are in competition for the job of team leader and a big bonus which would help Emmy pay off her father's mortgage after her brother-in-law borrowed and lost all her dad's savings in a business venture.
Charlie Featherstone's father has had a stroke, leaving Charlie in charge of finding a fresh new vintage wine to sell in supermarkets, and he employs Isaac, an American, who moves from wine region to wine region developing new products.
Emmy finds a purse in the market place and, borrowing a bike, returns it to Madame Beaumont. She is an old lady who has been tending her vines at Clos Beaumont on her own for years. When she falls and is hospitalised, Emmy is left to harvest her grapes and make the wine by herself.
Charlie's plan is to buy up Mandame Beaumont's vines and mix her vintage with the other local ones to make a winning blend and, to this end, he is very friendly to Emmy.
Isaac, on the other hand, wants to help her, but doesn't always agree with Madame Beaumont's advice for Emmy to follow her instincts. So there is a will she, won't she situation that keeps you guessing right until the end.
It's a great read. I was totally transported to France, witnessing the purple tinge to the early morning mist, smelling the rows of ripe grapes and tasting the local dishes that Gloria cooked. Sometimes it was very funny and at others very touching, but altogether delicious!
I loved it and can't wait to read Notes from the Northern Lights  due out on Kindle on December 15th 2016.

Email ThisBlogThis!Share to TwitterShare to FacebookShare to Pinterest
Labels: 'France', 'grapes', 'Jo Thomas', 'Late Summer in the Vineyard', 'Notes from the Northern Lights', 'The Olive Branch', 'The Oyster Catcher', 'wine'