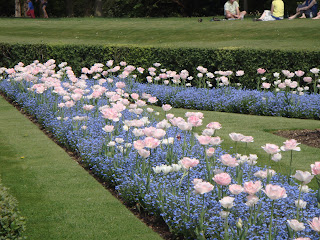 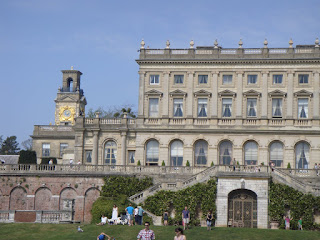 The sun shone so brightly on Good Friday that we decided to have a day out at Cliveden, a beautiful National Trust property near Maidenhead. Our SatNav with the voice of Homer Simpson, "You have reached your destination, and you can hold your head up high, for you are a genius!", took us to an entrance where we had to walk miles to even reach the house, but we saw the gardens on the way and I even managed to get my National Trust passport stamped in the shop. We had our picnic in a wooded glade by a little lake, but not too far to go back for ice creams!
The formal gardens were full of tulips and forget-me-nots, but with Easter being so late, were really past their best. Having been to Florence and Rome since my last trip to Cliveden, I could really appreciate the Italian architecture, and the balustrade which had been purchased from the Villa Borghese which we had visited in Rome. All in all, a fantastic day out.
Posted by Jean Bull at 09:51 No comments: 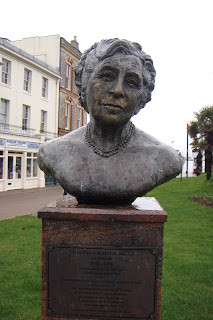 When I was in Torquay recently, I saw this bust of Agatha Christie who was born there in 1890. She wrote over 80 detective novels which were translated into more 103 languages. Known the world over for Hercule Poirot and Miss Marple, her books have been produced for stage, film and television. Her play The Mousetrap has run for over 23,000 performances.
She famously disappeared for 11 days in 1926, and to date there has been no real explanation. Her maiden name was Miller, and she married Archibald Christie, an aviator on Christmas Eve 1914. They divorced in 1928 and she married Max Mallowan in 1930. She spent many happy years in Wallingford, Oxfordshire, and is buried in the graveyard at Cholsey. The town has produced a leaflet called the Dame Agatha Christie Trail which takes you from the Corn Exchange in the Market Place, where she was the President of the Sinodun Players from 1951 to her death in 1976, to St Mary's in Cholsey and back again via The Red Lion.
www.wallingford.co.uk
Posted by Jean Bull at 19:27 No comments: