Nobody Can Do It Like A Steam Train! The Flying Scotsman Makes A Flying Visit to Reading 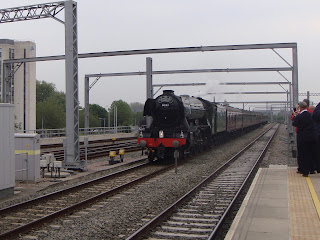 The eagerly awaited Flying Scotsman steamed into Reading this morning. People, from young boys with a camera and tripod, to grey-haired couples reminiscing about the steam trains of their youth, had started gathering early on the bridge, sharing rumours about which platform it would arrive on. But, the station staff were giving nothing away. 'Look out for the steam approaching down the line,' one said, helpfully.
At last, a transport policeman whispered, 'Platform 12, but keep it to yourself!'
Like some others, we decided we'd get a better view from Platform 13. It was like waiting in a crowd for an eclipse, or perhaps the New Year; the excitement was tangible. 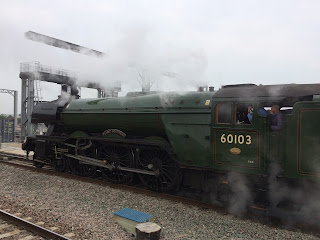 At last the Flying Scotsman muscled into the station, the steam filling our eyes, ears and noses with the sight, sound and smell of childhood journeys to the seaside.
This was the famous locomotive designed by Sir Nigel Gresley: its first long distance non-stop run was from King's Cross to Edinburgh nearly ninety years ago, and it was the first to reach 100 mph in November 1934. Amazingly also, from its construction in Doncaster, and service on the East Coast Line, it has travelled the world to America, Canada, and even Australia! 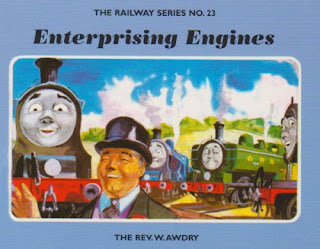 It has also been featured in Rev W Awdry's Railway Series as Gordon's brother in Enterprising Engines (still available on Amazon) when it helped to pull a train when its new diesel engine failed. 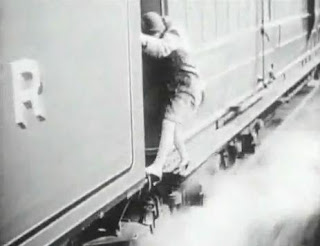 And famously, it starred in The Flying Scotsman (1929), a high speed thriller, legendary for its live action scene where actress Pauline Johnson clambers along the edge of the locomotive in high heels to save her father from an assailant.
So, for excitement, nostalgia and entertainment: 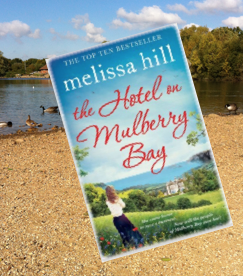 The two sisters in the Hotel on Mulberry Bay by Melissa Hill couldn't be more different: Penny is happy to stay at home in this beautiful Irish seaside town and help their parents, Anna and Ned, run the popular hotel where the locals have celebrated engagements, birthdays and weddings for many years, whilst Elle couldn't wait to leave for a career as an architect in England.
But the death of their mother, who has been the driving force behind the business, brings Elle back to find the old building falling apart and the family having to decide whether to make a go of it, or sell their treasured hotel with all its memories.
She also finds Rob, the boy she promised to return to (but never did all those years ago, after leaving for college in Dublin) is as gorgeous as she remembers; but the two of them find it so hard to tell each other their feelings after all this time.
As a subplot, Penny has always thought that Ned favoured Elle and discovers from Anna's diaries that he sold his beloved Beatles collection of original LPs when she was born to provide some money for the business, so she sets out with Colin, an English writer who turns up to stay at the hotel, to buy back the vinyl records and win back her father's love. 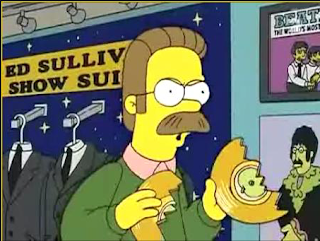 I like that because of this, Melissa Hill has given the family names inspired by The Beatles: Anna from the song on the album, Please, Please Me; Elle from Eleanor Rigby; and Penny from Penny Lane. However, I couldn't remember any Ned at all, until I Googled 'Ned + Beatles' and came up with Ned Flanders' Beatles collection which he keeps in his basement! That's brilliant, Melissa!
I really enjoyed this warm-hearted novel which explores the relationships between sisters; between couples; between a man and his daughters; and lastly between the people of a seaside town and the hotel which has brought so much joy to all their lives.
Posted by Jean Bull at 08:00 2 comments: