Welcome to my Writing Blog! 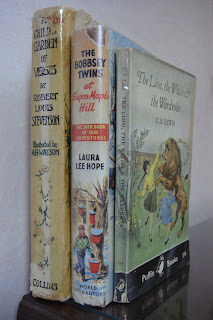 Hello, I thought you might like to know how I came to love writing.
I always loved books as a little girl - always wanted them for birthdays and Christmas when anyone asked. Our school also had a Public Library in the basement and I can remember the crisp new tickets we were issued - four yellow ones for fiction and two green ones for non-fiction. I used the yellow ones most. I adored The Bobbsey Twins and so did a boy in my class, therefore I had to rush down after school to make sure I got the book I wanted before he did! I also loved The Famous Five and all the other Enid Blyton books, such as Mallory Towers and the adventures of a boy called Barney and his monkey, Miranda. Eventually, my friend's mother, who belonged to a Writers' Circle (I always imagined them sitting round a cauldron like witches!), gave me A Child's Garden of Verses by Robert Louis Stevenson. I loved it and would sit up in bed and read it again and again. She also gave me The Magician's Nephew.Then, I borrowed The Lion, The Witch and the Wardrobe from my friend and didn't want to give it back! You'll be relieved that I bought one in the end with my pocket money, and there it is in the photo!
That's how I started reading, and I continued through the years through Elizabeth Goudge, Jean Plaidy, Thomas Hardy, Daphne du Maurier and on to more modern writers like Maeve Binchy, Marian Keyes, and Joanne Harris, not forgetting the books about the Moon and Mars by Ben Bova!
I'd always wonder about what happened next when a book was finished, and what a certain character would do about this or that. Then, one day when surfing the web, I saw something about a lady called Marian Mustard and a boat. I thought, I could write a story about her, and I did!
Later I went on a Creative Writing course at the local college. The lecturer said that she would give two tickets to a literary lunch to the person who wrote the best 1000 word introduction to a novel. I didn't win, but I had started my novel!
Posted by Jean Bull at 16:33 1 comment:

Email ThisBlogThis!Share to TwitterShare to FacebookShare to Pinterest
Labels: 'Public Library' 'The Bobbsey Twins' 'The FamousFive' 'EnidBlyton' 'Malory Towers' Writers' Circle' 'A Child's Garden of Verses' 'The Magician's Nephew' 'The Lion, The Witch and The Wardrobe'
Newer Posts Home
Subscribe to: Posts (Atom)