The Forgetting Time by Sharon Guskin - Quirky, and Unputdownable! 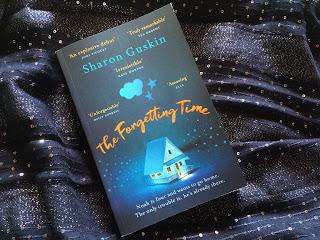 I love books that are a bit quirky: those where time slips and two people meet in different times, like in The Time Traveller's Wife, or Tantalus: the sculptors story, but The Forgetting Time by Sharon Guskin is something else entirely. Noah can remember another life; another home and another mother. He is just one small boy who can remember living in a different time.

'Noah is four and wants to go home.
The only trouble is, he's already there.'

This is the totally absorbing story of Noah who is driving his mother, Janie, to distraction because of his fear of having a bath (she has to use wipes to keep him clean); his nightmares when he cries 'Mama! Mama!' (although his name for Janie is Mommy-Mom); and his overwhelming desperation to go home. After trying many doctors who cannot help, she finds Jerome Anderson on the internet.
Anderson, in his sixties, has aphasia and is losing his ability to use words to speak and write. He has been studying reincarnation in Asia and wants to publish his life's work on the subject before it's too late, but he needs one last American case, according to his publisher, to make his book relevant to the US market.
He helps Janie and Noah find the family of Tommy Crawford, who was murdered at the age of nine, and whose mother, Denise, and brother, Charlie, Noah recognises.
Sharon Guskin then skilfully examines the delicate relationship that develops between Noah and Charlie; the trust that Janie puts in Anderson; the still raw emotions of Denise who has lost her son, and her coming to terms with the fact that Noah might just be the reincarnation of Tommy; the relationships between Noah and Janie, and Noah and Denise; the fact that Noah is white and Tommy was black; and the story of how Tommy was killed.
This is a brilliant debut novel and was totally unputdownable: I had to keep sneaking back to it to find out what happened next.
Posted by Jean Bull at 16:48