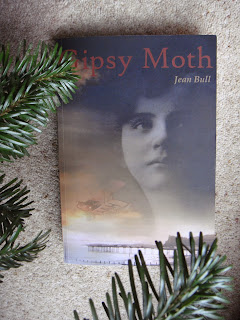 On December 1st, I set up a Christmas Kindle Countdown Deal on my historical romance, Gipsy Moth.
I experimented with putting it on Free Download last year, but now the rules have been changed so that these 'sales' don't count towards your ranking on Amazon, so although I had a great result then, which led to my book being recommended for a romantic read, any free downloads now wouldn't be taken into consideration.
I decided that the best way to promote my book was to run the deal over four days: two discounted to 99p and two at £1.99 before returning to the original price on Day 5.
Don't worry, Amazon works out the prices and time intervals for you. You just have to enter the dates, and can adjust their recommendations to suit your needs.
Obviously, the reason I tried this was to get people to buy my book, and I thought a good idea would be to put Christmassy extracts on my blog as tasters, and luckily the first one started on December 1st. Perfect!
I also found some snowy photos to set the scene and some vintage Christmas cards to get a feel of Christmas 1929.
Amazon recommended using social media to promote the deal, so of course, I blogged here; tweeted two or three times a day; and updated my Facebook page.
Was it a success?
After a good start and a rise in the rankings, on the first day, I slipped down again during the next two days, only for a rally on the fourth! I expect that was people buying the book before the final price rise.
Would I have done anything differently?
I think I could have been more enthusiastic to entice readers on Facebook and Twitter to read the extracts here and therefore buy the book, but overall it was a useful exercise and I enjoyed doing it.
Have you tried a Kindle Countdown Deal promotion?