Christmas won't be Christmas without Maeve Binchy - A Week in Winter 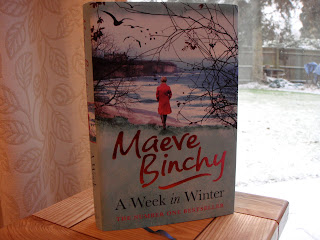 I used to look forward to having Maeve Binchy's latest book amongst my presents on Christmas Day. It would be in hardback, which made it even more special.
Of course, she died in July, so A Week in Winter will be the last I receive, which makes me sad.
Born in Ireland, she was a master storyteller for over thirty years, and I have all her novels and short story collections. It was, in fact, Scarlet Feather, the first book of hers that I read which inspired me to start writing.
A Week in Winter is like her later books which are a collection of short stories, linked together like Whitethorn Woods which was how people in a village dealt with the prospect of a new by-pass. This one is about  a collection of people who spend a week at a new hotel on the west coast of Ireland. It starts with Chicky Starr who sets up Stone House hotel. Maeve Binchy loved to write about capable women who can set up a business like for example, Cathy Scarlet, and Chicky is one of these.
The stories are mainly set around Stoneybridge, but others are set in England and Sweden. The Swedish story is about Anders who is to take on the family accountancy firm, but who has other ideas. Another story is about a couple who win their week at the hotel but would have rather gone to Paris.
As with all Maeve Binchy's fiction, you are left with a warm glow, and this book would be perfect to read on a snowbound weekend like this!
Posted by Jean Bull at 16:25