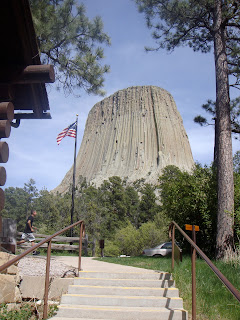 Did you see Close Encounters of the Third Kind way back in 1977? Do you remember how Richard Dreyfus piled mashed potato on his plate to make a mysterious mountain, and filled his house with mud and bushes to make an even bigger one? Well, here it is: Devils Tower in Wyoming - no apostrophe. The Native Americans called it Bear Lodge which I think is better. The story goes that seven little girls were being chased by giant bears. They jumped onto a tree stump and cried to the Great Spirit to be saved. The tree stump grew and grew whilst the angry bears scratched at it with their claws until it was over one thousand feet high, making the mountain that we see today, and the little girls became the seven Pleiades stars in the sky. 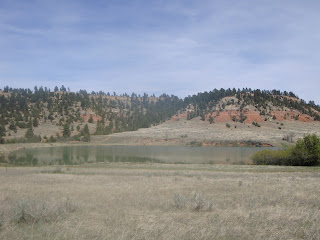 We approached the mountain along a red dirt track, wondering what the pioneers in their covered wagons must have thought when they first saw Devils Tower looming up, as they travelled through the red rocky cliffs and outcrops, topped by Ponderosa pine, and carpeted with pale green prairie grass. 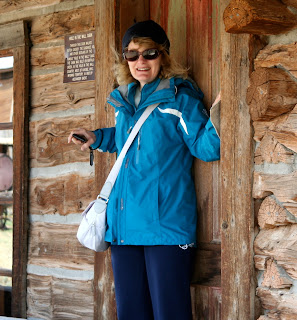 At Cody, just east of Yellowstone National Park, we visited the Old Trail Town of historic wooden buildings, brought from all over the area. It was closed, but the caretaker said we could go in to take some pictures of the outsides, so we did. Here I am pretending to come out of Butch Cassidy's cabin from the Hole-in-the-Wall valley where the Wild Bunch gang hid out. OK, he was an outlaw, but I loved the film!
What's your favourite Western?