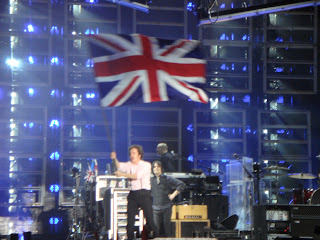 Sir Paul McCartney has been flying the flag for Britain ever since The Beatles put Liverpool on the map back in 1962 with Love Me Do leading to phenomenal worldwide success.
In the Sixties, I could only dream about going to a Beatles' concert, and had to make do with seeing A Hard Day's Night at the Odeon, just once, until years later, it was shown on TV at Christmas. No videos, DVD and Sky in those days!
One happy memory was buying about two feet of Beatles' wallpaper for my bedroom wall for one shilling and three pence (about 6p these days). The man in the decorating shop told us how to attach it to the existing wallpaper with dressmaking pins. I've just looked on eBay and a similar piece has sold for £27.99! I should have held on to mine.
Eventually, my dreams came true, and I got to see Paul at the NEC in Birmingham in early January 1990 in his tour Tripping the Live Fantastic. We all stood and danced in our seats as he sang songs from his time with The Beatles to Flowers in the Dirt, his latest album. 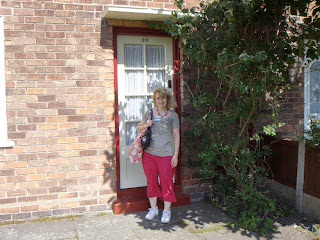 Three years ago, I finally visited Liverpool! Here I am outside 20 Forthlin Road, where Paul spent his teenage years. It is a National Trust property now (Fame at last, ha, ha!) and they do guided tours.  It was fabulous to see the actual spot where he and John Lennon sat to write I Saw Her Standing There, and walk round the house that would have been so familiar to him.
In 2010, I managed to get tickets for Hard Rock Calling in Hyde Park with Paul the headliner, WOW!
We got there at 12 and picnicked. By 2.30 it was filling up, and we stood until 7.30 with the temperature in the 30s. Then, there he was on the stage, and we didn't feel tired anymore. Neither did he, because he played for three hours without a break! Everyone joined in young and old, and amazingly everyone, young and old, knew the words. The top photo shows how close we got to him. It was unbelievable! Really, if you haven't sung Hey Jude with Paul and thousands of his fans on a hot June night, under the stars, you haven't lived!
On June 4th, 2012, Peter Kay introduced him in the Jubilee concert as 'the biggest influence on popular music the world has ever known  . . . they don't come much bigger than that!'
Happy Birthday, Paul! And many more of them!
Have you ever seen Paul McCartney or any of the other Beatles?
Posted by Jean Bull at 08:00