Wet Jubilee Weekend and a Visit to Hughenden Manor. 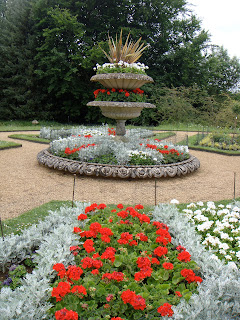 What a wonderful Jubilee weekend, despite the variable weather!
Yesterday, we visited Hughenden Manor, and managed to see the former home of Queen Victoria's Prime Minister, Disraeli, and the gardens before it began to rain.
The house, although grand, was quite intimate, and you could imagine guests arriving from London for one of the weekends that his wife, Mary Ann, would delight in organising. Of course, his most famous guest was Queen Victoria who came for lunch. We saw the chair that she sat on. Disraeli ordered the legs to be sawn off a bit so her feet could reach the floor.  It made me wonder though if she could still reach the table, or did she disappear from view as she sat down?
The other interesting part of the history of Hughenden is that it was used during the Second World War as a secret intelligence base to analyse aerial photographs and produce maps for bombing missions. The old Ice House is set up to show the photographic workshop, and the cellars of the house to recreate the lives of the people who worked there.
Thanks to everyone who took advantage of the Gipsy Moth free download over the weekend. Over 850 copies were downloaded! I hope that you will enjoy reading it!
Posted by Jean Bull at 20:14