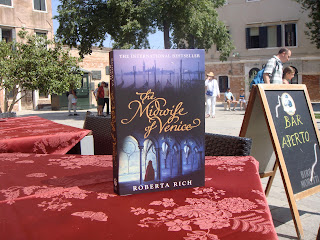 I wanted a book to read on a recent trip to Venice, and saw The Midwife of Venice in Sainsbury's. I wasn't sure whether I'd like it because it was set in 1575, but as Venice hasn't changed much over the centuries, it was interesting to identify the places that Roberta Rich mentioned. One of these was the Campo de Ghetto Novo where Jews were, amongst other things, locked up at night, and made to wear red hats during the day to distinguish them from Christians.
It is here that Hannah lived, working as a midwife whilst her husband, Isaac, set sail for Constantinople, hoping to make a fortune, only to be captured as a slave in Malta.
When Hannah is implored by a Christian count to deliver his wife's baby, she agrees and gets enough money to buy Isaac's freedom, but things turn out to be not that simple.
The story is set in Venice and Valetta, as the couple struggle to get back together. The characters and setting are well drawn, and I was gripped by the story, hoping to find out if they would be reunited. 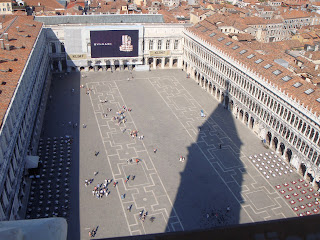 In Venice, there is only one piazza: the Piazza San Marco. All the other less important squares are called campo which means field.
The word ghetto, comes from the Italian geto, meaning foundry, which used to occupy the site.

The fabulous thing about Venice is that you will not be disappointed, because it looks exactly as it does in the guide books and on films and TV.

However, it was difficult to find a novel about Venice - there are plenty about Tuscany!
Can you recommend a good one?