I've been reading The Little Women Letters by Gabrielle Donnelly this week. 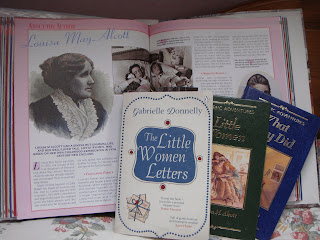 I've been enjoying The Little Women Letters by Gabrielle Donnelly, after seeing it reviewed in Woman's Weekly. It's set in modern London, about a family of girls who are the descendants of Jo March. (You've really got to have read and loved Little Women by Louisa M Alcott to appreciate it though!) This family of girls mirror the characteristics of their ancestors: soon-to-be-married Emma is Meg, clever Lulu is Jo, who I think may marry her professor(!), and actress Sophie is the vain Amy. Lulu finds Great-great-grandma Jo's letters to her own sisters in the attic, and finds parallels in their twenty-first century lives. On the cover, Penny Vincenzi calls it 'a personal treasure trove', and I know what she means. It's like finding letters written by your own great-great-grandma or aunt.
I've always preferred American nineteenth century novels to the English ones which means that I've never been a fan of Jane Austen. (There, it's out - I've said it!) I think it all stems from the introduction I had at school to Jane Eyre. Yes, I know it was written by Charlotte Bronte, but I connected the terrible treatment that Jane had at Lowood School with all the other English novels of that time. Little Women was much more my cup of tea, and although the family lived in hardship whilst their dear papa was off ministering in the Civil War, the book came over as far more cheerful and fun. The other book I loved was What Katy Did by Susan Coolidge. Of course, she had to cope with becoming an invalid, but still I loved this story and read them both again and again.
Anyway, back to Little Women. There have been many films and TV series, and whilst Katherine Hepburn will always be the definitive Jo, I remember the BBC version in 1970 with Angela Down as Jo, Martin Jarvis as John Brooke, and Patrick Troughton as Mr March. One scene that sticks in my mind is a shot through the window of the girls and Marmee sitting together sewing on Christmas Eve and singing The First Noel .
A few years ago, I visited Boston, and was able to take a 'side trip', as they say over there, to Concord, Massachusetts and visit Louisa M Alcott's family home which inspired her to write her novel about a family of sisters. Like the March girls, they used to put on the plays that Louisa wrote, and you can see the recess and curtains that acted as a stage for their productions, and if I remember correctly, the wonderful pair of long leather boots that Louisa used to stride about in!
Posted by Jean Bull at 15:53