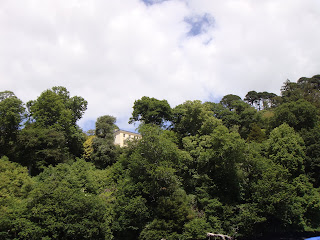 Tucked away, like one of her mysteries, in the woods high above the River Dart in Devon, you can just make out 'Greenway', Agatha Christie's summer home until 1959. A Devon girl, born in Torquay in 1890, Agatha Christie bought this holiday paradise with her second husband, Max Mallowan. It is now a National Trust property, and is open from March to October and you can even arrive up the river by boat!
Following in the tradition of writing about what you know, this famous author used her house, which dates back to 1700, as a setting for some of her novels. For example, Deadman's Folly (1956), Five Little Pigs (1943) and Ordeal by Innocence (1958).
She also set many of her other stories in the surrounding area, one of which is The Regatta Mystery (1939). This is set in Dartmouth at Regatta time, and it is thought that The Royal George Hotel is based on The Royal Castle Hotel, a popular inn for seamen in the seventeenth century and later a coaching inn, now a well renowned hotel on The Quay. And, coincidentally, it was used as part of the set for the shooting of Ordeal by Innocence in 1985!
So grab your pile of Agatha Christie novels or your Kindle(!), and head down to the River Dart for a summer of mystery!
Posted by Jean Bull at 20:16