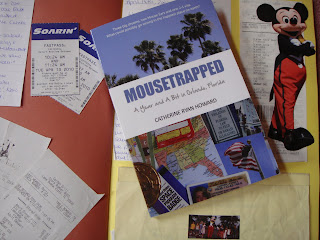 I really loved Mousetrapped by Catherine Ryan Howard.
Last Wednesday, when I decided to self-publish my novel, I found Catherine Ryan Howard as a guest blogger on Talli Roland's blog. She was actually promoting Self-Printed, a guide to self-publishing, so I was very interested. But she also mentioned Mousestrapped, a non-fiction book describing her experiences working in Disney World, Florida, for eighteen months. I couldn't resist it, ordered it from Amazon, began it on Saturday and finished it in 30 degree Florida-like weather on Sunday afternoon.
I adore Disney World, and it was great to have a free visit, courtesy of Catherine's book. It was great to revisit the Kennedy Space Center too! I managed to see a Shuttle lift off several years ago. We left Orlando very early in the morning and arrived to park by Indian River just as it took off. We were so lucky, as other people had camped there all night. What a shame there is only one Shuttle flight left. Back in the time of the Apollo missions, we thought that by 2011, which was a long way in the future, we'd all be travelling to Mars!
Christine has a great style that just sails along through all the reasons why she decide to try her luck in Disney World, and the problems she had living in Florida - without a car!- and how she solved them. I would certainly recommend it. I've ordered her self-publishing book too, and I'll let you know how I get on with that.
Posted by Jean Bull at 14:57