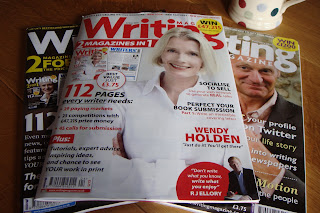 Success at Last! In 2010, my New Year's Resolution was to get a short story published, a) to get some recognition for my writing and b) to hone, as they say, my writing craft. I entered every competition in Writing Magazine, Writers' News and Writers Forum, plus those set up by authors, Rowan Coleman and Cally Taylor and also one in Mslexia.
Although I had some good feedback, it wasn't until December 2nd, that I had an email to say that I'd come second in the Writers' News competition for a story about "Impatience". I think I'd been very patient, don't you?! Anyway, I was over the moon!
The results are in this month's issue and it's great to see my name in print at last! However, I couldn't find my story on their website which is where it should have been published. So I contacted Jonathan Telfer, the Editor, who said that their new website will be launched soon and my story will be on there. Hooray! I'll let you know when it appears and you might like to read it!
Posted by Jean Bull at 08:39