The Postmistress by Sarah Blake 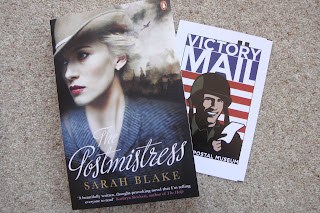 I bought this book because I thought it might be like Anita Shreve's novels set on the Eastern Seaboard which I have loved so much. I also thought that 'the one night in London the fates of all three women entwine' might be because they fell in love with the same man. But no.
The novel could so easily be called The War Reporter as it does centre around Frankie Bard, the radio reporter who records the voices of people caught up in the exodus from Europe to America in 1941. But, she is also the postmistress because she has a letter to deliver.
A motif in the story is that you can't see outside the photo. You can only see what is in the picture at the time it was taken. Similarly, Frankie can never find out what happens to the people she talks to after they have continued on their journeys. In the same way you never find out what happens to Frankie, Iris, the real postmistress, and Emma, a young bride, after the book has finished. It's just a snapshot of their lives at this time.
Reading this novel with the news this week about the people made homeless by the Japanese earthquake, tsunami and possible nuclear accident, and others desperate to escape to their home nations, reflects and highlights the plight of those people Frankie could only capture for a moment on her disks.
This is a fantastic book, haunting and real. I will read it again.
Posted by Jean Bull at 14:13