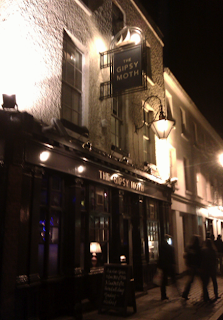 Franzi has sent me this photo of The Gipsy Moth pub in Greenwich. www.thegipsymothgreenwich.co.uk
It is called this because Gipsy Moth IV, the boat that Sir Francis Chichester sailed around the world in in 1967, was on display here for several years before being restored and sailed around the world again in 2005.
What is the link between Sir Francis and the Gipsy Moth aeroplane? Well, he flew solo to Australia in one in January 1930, and named his boats after the iconic little bi-plane.
PS Franzi has a beautiful blog if you'd like to visit it at http://franzifritsch.blogspot.com/
Posted by Jean Bull at 07:45