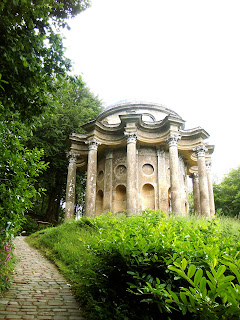 The Temple of Apollo is a folly overlooking Stourhead Gardens in Wiltshire, and Santa Montefiore uses one like this in The Summer House.
It isn't one of Santa's usual stories of sapphire Italian skies or French vineyards, heavy with purple grapes, but is set in Fairfield, an English country estate, and tells the story of Antoinette Frampton and Phaedra, who turns up at her husband's funeral claiming to be his daughter.
George, Lord Frampton, was only 58 when he was killed in a skiing accident, and his wife and sons are reassured by Julius Beecher, his friend and lawyer for 30 years, that a DNA test confirms her claim. 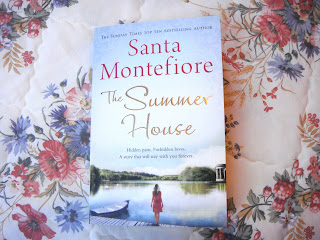 It's recently been in the news that Peaches Geldof has called her new son Phaedra, and I was surprised to find the same name here. It's usually a girls' name, and can be pronounced as Fey-dra, Fee-dra, Fie-dra, or  Fed-dra which I think that Peaches has chosen. It means bright, and in this story the character is a blue-eyed, blonde Canadian with a positive attitude who is embraced by George's family. There is a growing mutual attraction between her and David, the eldest son, which they both try to resist as they help Antoinette restore the summer house to its former glory. However, Phaedra isn't telling everything. What is her secret? What is her true identity?
The story also deals sensitively with Antoinette's loss, and also her worry that if George had kept his secret about Phaedra from her, what other secrets did he have? 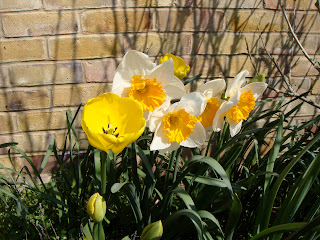 Altogether, a gripping story told against an English country spring that unfolded around me as I read it. Beautiful!

Which is your favourite Santa Montefiore novel?
Posted by Jean Bull at 08:59