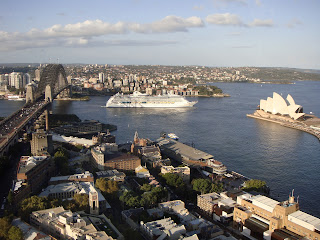 Ok! I make no apologies for the fact that one of the books I read in Australia was by Jojo Moyes . . . I was on holiday and I love her books!
Here is the Radiance of the Seas setting sail from Sydney Harbour on a sunny February evening. Contrast this with the departure of the HMS Victoria, an aircraft carrier, leaving Sydney on a grey July day in 1946, transporting 650 Australian wives to Plymouth to reunite them with their British servicemen husbands. Sydney Harbour Bridge, built in 1932 would have been there, but obviously not Sydney Opera House, which was opened in 1973. However, the buildings in the area known as The Rocks in the foreground would have existed, but as a rundown, former slum area which used to be frequented by sailors and prostitutes and was, at that time, in danger of being demolished. However, today, The Rocks has been saved and forms a popular tourist area with pubs, restaurants and cafés.
It's the second time that I've read The Ship of Brides, the first time was several years ago and in fact I'd lent it to someone for their trip to Australia and never got it back!
The story focuses on four brides: Margaret, pregnant with her husband, Joe's, baby; the Melbourne socialite, Avice, dismayed at having to travel on an aircraft carrier; naïve Jean, barely sixteen-year-old, and Frances, a nurse who has served in the South Pacific. Other characters whose stories are also told are Captain Highfield on his last voyage before retirement, and the Marine who is posted outside the girls' cabin every night to keep them safe from the other sailors. 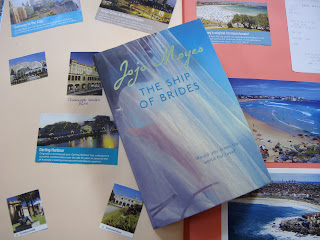 Jojo has been very thorough, as always, with her research, describing life on the aircraft carrier and the alterations which had to be made to allow the brides to live on it for six weeks. This forms the setting to reveal the story behind each girl, how they change on the journey and what happens on their arrival at Plymouth - if they make it there.
A nice touch at the beginning is the description of one of the girls, now a lady of advanced years, witnessing the dismantling of the aircraft carrier in an Indian scrapyard. It is not until the final chapter that we find out who she is.
I can recommend this book for being alternately heart warming and heart wrenching, whether you read it in Australia or at home.

To celebrate the May Day Bank Holiday weekend, whether it rains or shines, I'm offering a FREE DOWNLOAD of my book of Twelve Super Summer Stories,  Postcards and Suntan Cream from 8am Friday, 3rd May 2013 to 8am Tuesday 7th May 2013, British Summer Time. Just click on the book cover at the top of the page!
Posted by Jean Bull at 07:00