A Postcard from San Francisco featuring a new book by Miranda Dickinson! 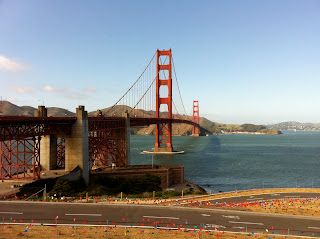 Here is the iconic Golden Gate Bridge in San Francisco. Very often, the top or the bottom is shrouded in mist. It was built in 1937, the same year that Snow White and the Seven Dwarfs was released. We had just been to an exhibition about  the film at the Walt Disney Family Museum at The Presidio. 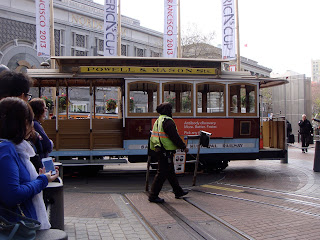 San Francisco is like no other American city with its cable cars hurtling along like the night bus in Harry Potter: people clinging on for dear life up and down the precipitous streets and around the corners.
The most amazing thing is that the gripman (who operates the grip which catches and releases the cable under the road) and the conductor actually get out and push the car around at the terminus whilst the people in the queue wait and take lots of photos. 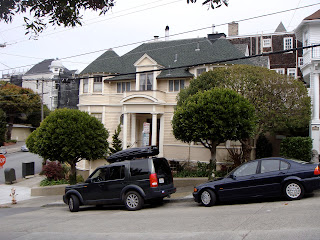 Many films have been made in San Francisco, including one of my favourites, Mrs Doubtfire, starring Robin Williams. Here is the house on the corner of Steiner and Broadway. The address, 2640 Steiner Street, as given by Miranda to Daniel in the film, is the actual address of the property. It's not very usual to give that out that sort of information, but it helps tourists to find it! 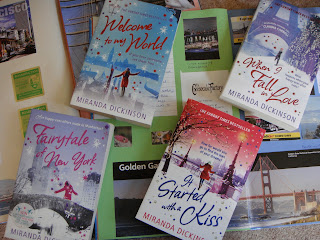 Although many books are set in San Francisco, my suggestion hasn't even been written yet! It doesn't even have a title. The clue is in this selection of books by Miranda Dickinson.
When I got back I came across a vlog by Miranda, setting out the scenes and people she is going to include in her next novel set in . . .  San Francisco! She'd been on a research trip with her husband and put up videos about the places she'd seen which you can find here.

To celebrate the May Day Bank Holiday weekend, whether it rains or shines, I'm offering a FREE DOWNLOAD of my book of Twelve Super Summer Stories,  Postcards and Suntan Cream from 8am Friday, 3rd May 2013 to 8am Tuesday 7th May 2013, British Summer Time. Just click on the book cover at the top of the page!
Posted by Jean Bull at 07:00