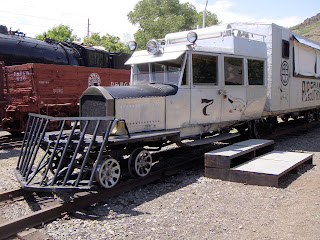 Before we left Denver to drive north to South Dakota, we visited the Colorado Railroad Museum. Amongst all the locomotives and passenger cars or coaches, were three of the seven Rio Grande Southern Galloping Geese. As you can see, they were a cross between an automobile and a freight car, and so were cheaper to build and run. They got their name from the waddling action of the rear car on rough mountainous tracks.
As we drove through Wyoming, we could see the wooded Black Hills of South Dakota in the distance, and we were soon amongst them. It reminded us of the Alpine regions of Germany or Switzerland, with pine trees and log cabins.
At Custer, we bought ice creams from The Purple Pie Place: yummy Blueberry Cheesecake and Rocky Road, before arriving at Crazy Horse. 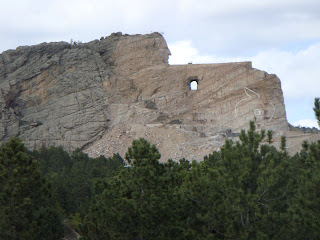 This is a huge monument to Chief Crazy Horse being carved into a mountainside. To give an idea of the scale, the small 'bump' above the hole in the mountain is a large truck!
It was started by Korczak, a Polish immigrant from Boston, in 1948, and after his death in 1982, the work has been carried on by his family. It will eventually feature the Chief on his horse, pointing to the lands where his people are buried.
What vision and faith Korczak must have had to start such a project!
Posted by Jean Bull at 09:36