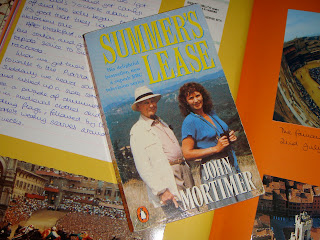 Happy Bank Holiday Monday!
Summer's Lease by John Mortimer is one of my all time favourite books, and funnily enough, it's the only one of his books that I've ever read.
I read it because I had enjoyed the BBC television drama in 1989, starring John Gielgud and Leslie Phillips.
It's about a family of five, plus father-in-law, who rent a Tuscan villa for the summer, and who get embroiled in a murder. I don't usually like murder mysteries either, but I think I like this one because it's set in Italy, and I've read it again nearly every year since.

I'd always wanted to visit Siena where some of the action takes place in the book, and a few years ago my dream came true. We weren't able to go on the day of the actual Palio horse race around the shell shaped Piazza del Campo, but we were able to see the horses and riders being drawn. There were crowds of people, goodness knows what it's like on the race days of July 2nd and August 16th. 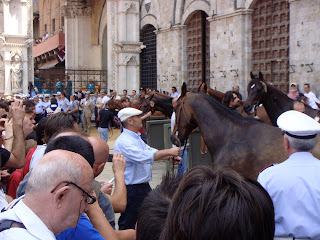 Have you read Summer's Lease?
Maybe you've been to the Palio?
Posted by Jean Bull at 08:30