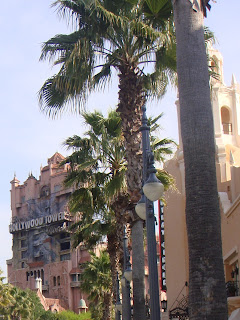 It's our last day of our virtual trip to Disney World and we're off to the movies at Disney's Hollywood Studios! I hope that you're all glammed up because, you never know, you might be discovered by a famous producer as you stroll along Hollywood Boulevard.
I thought you'd like to visit the Hollywood Tower Hotel. Let's go inside. It's a bit gloomy because it was hit by lightning on October 31st 1939. Funny how all the bell hops still seem to be wearing 1930s uniforms . . . I wouldn't worry, but they do say that on that night, a whole elevator full of guests was transported to The Twilght Zone . . .
It's very dusty in here, as if it hasn't been touched since the lightning struck. Now we're being asked to board an elevator to discover the secret of this spooky hotel. Come on, you're not scared, are you, even if it does feel like being in The Twilight Zone programme itself?
Agh! We're falling!! The doors are opening! We can see the park! Now, we're going up again.  No, I'm not scared, not at all. Did you jump out of your seat? I did. Would you like to hold my hand?
I'm glad that's over, we must have gone up and down three or four times, I lost count, did you? At least we are still in one piece. 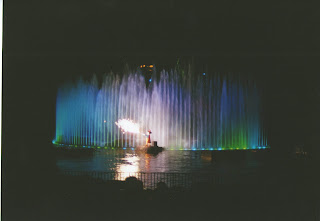 As it's our last night in Disney World, I thought we could have a treat and go and see Fantasmic! We have to get there early to get a seat, but we can have some frozen lemonade whilst we're waiting, and jump up and down as the Mexican Waves come past.
It's a show about Mickey Mouse overcoming the scary images in his imagination, using evil Disney characters like Ursula, and Snow White's wicked step-mother projected on fountains; fireworks; fire on the water; live action and boats. Let's sit back and watch it. It's the ultimate feel-good show when Mickey and all that's good triumph in the end.

I hope that you've enjoyed our trip to Disney World as much as I have. As Mickey says at the end of the show, 'Some imagination, huh?'
Posted by Jean Bull at 09:11