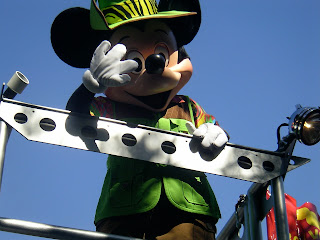 Happy Easter! I hope you got back safely after the Illuminations last night!
Today we're off to the Animal Kingdom. It's cooler and shadier than the other parks, so it's not so tiring - except for Expedition Everest! Let's take a ride!
We catch a train here for a short cut through the Himalayas to Mount Everest. Quite safe. Don't worry. Hold on whilst the train climbs up through the mountains. Up here at the peak, we can see out all over the Animal Kingdom. Wow, it's fabulous!
But what's this? What's happened? The track is missing: it's been ripped up by the Yeti who lives in the mountains! Agh!! Now we're going backwards, (it's the only way to go) spiralling down through a dark tunnel. Are we looping-the-loop? Help! The Yeti's following us! 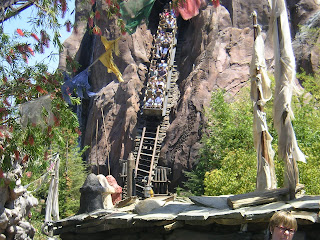 The train speeds away, everyone screaming. Then, we scream even more as the train shoots down a 80 foot drop. Agh!!! Then through the mountain again, back to the station, as we hear the Yeti's roars.
At least we're back safely.
I told you there was no need to worry! 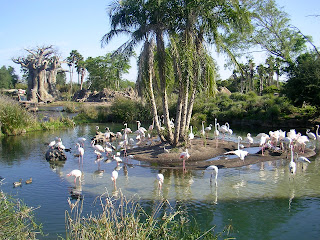 Let's try something quieter now - the Kilimanjaro Safari. The Animal Kingdom was set up to conserve animals (well, perhaps not the Yeti) and here we'll go on a real safari in camouflaged trucks, amongst  real live lions, elephants and hippos. Look at these  beautiful pink flamingoes. There that's better, isn't it?

Tomorrow, it's Disney's Hollywood Studios, so put on your Oscar-winning sunglasses and big smile.  We're off to the movies!

Which is your favourite Disney theme park?
Posted by Jean Bull at 10:23