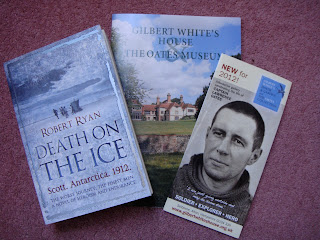 According to Steve Parker in Scott's Last Expedition
March 30th 1912 was probably the date that Scott, Wilson and Bowers died on their return from the South Pole, only eleven miles from salvation. However, as the last entry in his diary was on March 29th, that has been taken as the date that is considered to be correct. Therefore, a memorial service was held in St Paul's Cathedral yesterday, but it wasn't considered important enough to be on the six o'clock news.  Why was this?
The reason is probably that although Scott reached the Pole, he and his men perished on the way home. Much has been written about the mistakes that were made: unsuitable horses, experimental motor sledges, lack of food for the dogs and taking five men on the last push to the Pole, when there was only food and rations for four.
Nevertheless, I feel that Scott should be celebrated. No, they didn't return home, but the expedition was as risky as the Apollo missions over fifty years later: out of touch with civilization, like the astronauts, with no way of rescuing them. Today, there is a large scientific community at the South Pole with studies started by Scott and his expeditions, and  helicopters and snowmobiles to rescue any injured scientists or adventurers at the ready. 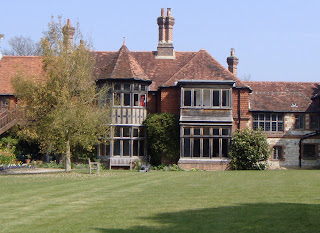 Today, I celebrated Scott, Oates and the rest of the polar expedition by visiting The Oates Collection at Gilbert White's House in Selborne, Hampshire, which tells the story of his tragic life and death. The highlights for me were the letters that he wrote to his mother, and the only book he took to read, a biography of Napoleon, his hero.
Also today, I finished Death On The Ice by Robert Ryan. This is a novel about Captain Scott, which also tells of the life of Captain Oates, and Tryggve Gran, the Norwegian skiing advisor in Scott's team. It was a great read, and I learned a lot about the expedition which helped me to understand the exhibition today. Some of the passages are as vivid as a Hollywood film, for example when they have to rescue the horses from the pack ice where they are being attacked by killer whales.
The search team erected a wooden cross in 1913 to Scott and his men, with an inscription from Tennyson's Ulysses:
'To strive, to seek, to find, and not to yield.'
I think that Captain Scott and his polar expedition did that, don't you?