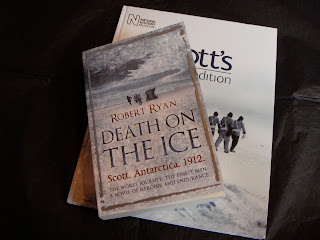 Tonight is Captain Oates Night.
It is one hundred years since he took that self-sacrificing walk into the blizzard, telling Captain Scott on the return from the South Pole when they had been beaten by Amundsen and his Norwegian party, that he was just going outside and may be some time.
You may have read in my previous blog how much this affected me as a seven year old writing a diary in junior school to celebrate 50 years since Scott's expedition.
I have now been reading Death On The Ice by Robert Ryan. I thought at first that I was too late as Scott arrived at the pole on January 17th 1912, but of course, it took two months to get back to the point where Oates decided to leave the others because of his frostbite, and from then on Scott, Wilson and Bowers carried on for just two weeks more, dying on March 30th 1912.
It was such a sad end to an attempt to conquer one of the last remaining unmapped places on earth.
Oates body was never found, but a cairn of stones was erected with the inscription:

'Hereabouts died a very gallant gentleman, Captain L. E. G. Oates, of the Inniskilling Dragoons. In March 1912, returning from the Pole, he walked willingly to his death in a blizzard, to try and save his comrades, beset by hardships.'
Posted by Jean Bull at 20:58

Email ThisBlogThis!Share to TwitterShare to FacebookShare to Pinterest
Labels: 'Captain Oates', 'Captain Scott', 'Death On The Ice', 'I may be some time', 'Robert Ryan', 'Scott, Amundsen, Wilson and Bowers'