Twelve Days of Christmas by Trisha Ashley and, Twelfth Night! 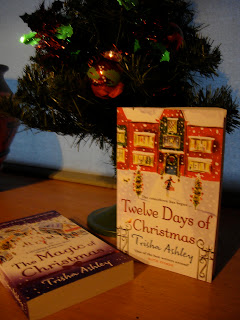 I have just finished Twelve Days of Christmas by Trisha Ashley while it's still strictly Christmastime!
It's a heart-warming book, perfect to snuggle up with as it says on the back 'with a mince pie and a glass of mulled wine'.
Holly Brown, a young widow, goes to house-sit in a lovely old house on the Lancashire moors. It does take about 100 pages for the cast to assemble, including four suitors for Holly (!), but after that it's a roller-coaster ride through the holiday season when they are all snowed in, and you are kept guessing as to who is the one she will choose in the end. I loved it! And as there's a lot of cooking in it, I was inspired to make some of the dishes, like venison casserole and cottage pie!
I bought The Magic of Christmas, also by Trisha Ashley, at the same time, but I'll just have to put it away until December!
There's always a discussion at this time of the year as to when Twelfth Night really is. If you count the nights from Christmas, you come to tonight,  January 5th, but the Three Wise Men are considered to have arrived on Epiphany,  January 6th.
On my travels this year I have found that in Spain and Iceland, they celebrate it on the 6th.
In Spain, it is the festival of the Three Magic Kings. Children write a list to them on December 26th and leave out satsumas, nuts and cognac for them, and water for their camels (!) when they arrive on Epiphany Eve, the 5th, to fill their shoes with presents.  They also have illuminated Kings climbing up their houses in much the same way we have Father Christmas!
In Iceland, Christmas, or Yule, also ends on January 6th with big neighbourhood parties to celebrate the departure of the last of the 13 Yule Lads who leave, one by one, after Christmas Day. Bonfires and fireworks are also lit and elves and trolls join in with the dancing!
So for me, January 6th is definitely when I take down my decorations!
Posted by Jean Bull at 16:49