Wizard of Oz at the London Palladium 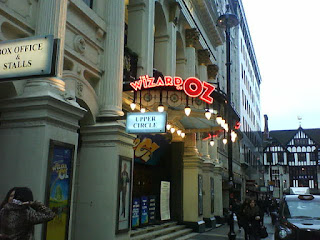 We've just been to see the Wizard, the Wonderful Wizard of Oz, at The London Palladium, and it was fabulous!
The staging and special effects are magical, as you would expect from such a wonderful theatre with its legendary revolving stage, and we were swept away to Oz in the typhoon, and explored that fantastic land with Dorothy and Toto, who was so clever too.
Danielle Hope sang beautifully, well, we knew she could from watching 'Over the Rainbow', on the BBC a couple of years ago, which she won, giving her the part in the show.
Michael  Crawford played a very scary Wizard, as well as Professor  Marvel. It's the third time that we've seen him: once in Swindon in a play with Michelle Dotrice, called 'Same time Next Year' - a bit like One Day, and also in 'The Woman in White'. we'd have loved to see him in 'The Phantom of the Opera', but his voice still shone through today.
All in all it was a fantastic show! We booked in advance,  but today they had some seats available in person for £25.
So what are you waiting for?  Fly over the rainbow to the merry old land of Oz!
Posted by Jean Bull at 19:44

Email ThisBlogThis!Share to TwitterShare to FacebookShare to Pinterest
Labels: 'Danielle Hope', 'London Palladium' Dorothy, 'Michael Crawford', 'Michelle Dotrice', 'Over the Rainbow', 'The Phantom of the Opera', 'Wizard of Oz', Toto