Leonardo da Vinci: Painter at the Court of Milan 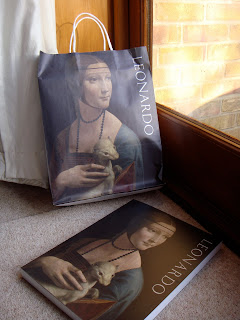 Forty years ago, I studied the Renaissance from a history book with no illustrations! How I ever managed to get my 'A' Level without ever seeing The Virgin of the Rocks, or The Last Supper, I'll never know!
As time went on, I eventually visited Florence and Rome, but this year, Leonardo da Vinci: Painter at the Court of Milan,  is in London, and I just had to go.
There were over 90 exhibits, and it took three hours to go round, but it was astounding. The highlights for me were, of course, the beautiful paintings gathered there from around the world in one place, for such a short time: the beautiful sixteenth copy of The Last Supper, and the two versions of The Virgin of The Rocks, which Leonardo, himself, may never have seen together in one room.
Moreover, though, were the many sketches and cartoons which he made in preparation for his masterpieces: some quick impressions; another one worked over and over, until it was an inky blob. This showed the way that his work evolved from different ideas: a foot here, a group of men there, to be absorbed and built up into a breathtaking whole. I thought that it was rather like the way a writer works, taking elements from the world around them and building them, through trial and error, into a finished work.
If you've been to see the exhibition, you'll know what I mean; if you've got tickets, you're going to love it (wear comfy shoes!); if you haven't got tickets, someone said yesterday that they are on eBay for £300!
I'm glad that I booked in advance!
Posted by Jean Bull at 10:22

Email ThisBlogThis!Share to TwitterShare to FacebookShare to Pinterest
Labels: 'Leonardo da Vinci:Painter at the Court of Milan', 'National Gallery', 'The Last Supper', 'The Virgin of the Rocks', Florence, Leonardo, Rome