The Muse by Jessie Burton - A Gripping Story about Art, the Sixties and the Spanish Civil War 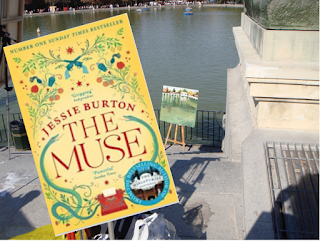 I bought The Muse by Jessie Burton last year, and on seeing it in Waterstones recently, nearly bought it again. It was high  time, I thought, to read it at last!
Not sure what to expect because I hadn't read Jessie Burton's bestselling first book, The Miniaturist, I was attracted by the idea that this one was set in 1967 and 1936, and intrigued that the central character who linked the two stories together, was Odelle Bastien, a girl from Trinidad, which made it interesting to read about the Sixties in London from an outsider's point of view.
In 1967, Odelle and her friend, Cynthia, work in a Dolcis shoe shop, a far cry from the golden image of London they had dreamt of back in the Caribbean. She knows she deserves better than this because she was well educated in the British way at home, so she applies for a job at the Skelton Gallery, and to her surprise, is taken on as a typist by the enigmatic, Marjorie Quick.
One day, Lawrie Scott comes in with a painting of a woman carrying another woman's head which he wants valued with a view to selling it as it is all he's got now his mother has died and his stepfather is selling the family house.

Back in 1936, Olive and her mother, Sarah, move to Arazuelo, near Malaga in Spain, as her Austrian father, Harold Schloss, is finding it hard to live in Vienna because of the growth of antisemitism there. Olive loves painting and gets offered a place at The Slade School of Art, but she knows her father is against women as artists and will not let her go.
On their arrival at Arazuelo, Isaac and Teresa Robles, a brother and sister, come to help them in their finca (a Spanish house in the country). Isaac is also a teacher of Lithography, and teaches the people of the workers' union to read and write.
Later in the story, Teresa swaps a painting that Olive has done (unbeknownst to her parents) for the one that Isaac has painted of Sarah and Olive. Harold is delighted with 'Isaac's' work and wants to take it to Paris to be sold with far-reaching repercussions for the family, Teresa, and her brother.
Of course, this is the painting that Lawrie takes to the Skelton, and the story unfolds as Odelle searches for the real artist who painted it.
Jessie Burton has set the scene convincingly for 1960s London when every traditional value was being challenged, and 1930s Spain on the brink of civil war, and has drawn believable characters from all these different backgrounds.
The story is gripping. I could not leave the book alone, and I enjoyed it very much discovering the secrets of the painting which had been hidden for over thirty years.
Posted by Jean Bull at 08:00