The Honey Farm on the Hill by Jo Thomas - Magical, Romantic, Thrilling and Funny 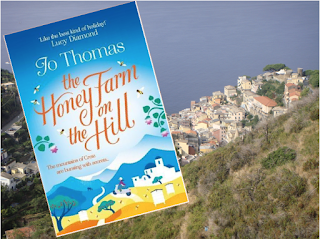 This isn't a photo of Crete because I haven't been there yet - it's Italy - but after reading Jo Thomas' new book, The Honey Farm on the Hill, I can't wait to visit the Greek island!

Things are not going well for Nell. She's working in a Christmas decoration factory when it burns down; her eighteen-year-old daughter, Demi, has left home to be an au pair in London; and her rotten boyfriend is in bed with someone else, so with no job, no boyfriend, and no daughter to look after, she decides to return to Crete, the one place where she felt truly happy, but where she left Stelios, Demi's father.
She's tried to forget him over the years, but it's been hard, so now that she has no responsibilities, she decides to return to Crete and find him and tell him they have a daughter.
She gets a job as a WWOOFer*, unpaid work on an organic honey farm, owned by Maria and Kostas, to help prepare their honey factory for when the bees return. The problem is that the bees live on a herb called dittany which is only found high up the mountain, but which is dying out because it keeps getting picked by tourists for its healing properties.
A grumpy man called Georgios, not much older than her, warns her off the mountain because of the drug dealers who hide away up there, but small bunches of the herb arrive mysteriously on the door steps of people who need it to heal their arthritis or gout.
With no bees, and having done all she can on the honey farm, Nell gets a part-time job at the restaurant owned by Stelios' family, not saying who she is, but wanting to find out whether he's got married and had children of his own.
But when entrepreneur, Harry Henderson, comes along and befriends Nell, the whole mountain community is in jeopardy because of his plans to build an exclusive resort.
Will the bees and (as Kostas' mother, Mitera, believes) love return to the mountain, so everyone, including Nell, can live happily ever after?

I've read every one of Jo Thomas' novels and this one is the best yet. It's magical, romantic, thrilling and funny: everything you need in one beautiful, gripping story. I hope that you enjoy it too!