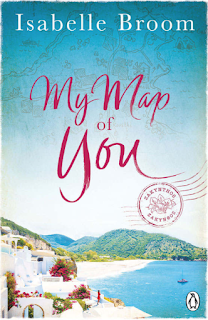 Who can resist reading about summer holidays now autumn's  here? Dreaming of revisiting those magical days spent in the sun?

Here, in My Map of You, Isabelle Broom transports you to the Greek holiday island of Zakynthos with Holly Wright who has just inherited a house there from an aunt she's never heard of. And you can explore the island with Holly as she discovers the secrets of her family's past.
Holly has a good job at Flash magazine (even if she doesn't get on with her boss, Fiona) and a wonderful boyfriend called Rupert, but when she receives the solicitor's letter about the house in Zakynthos, her whole life changes.
She's still trying to come to terms with the death of her mother, Jenny, from alcoholism, and now she's shocked to find that Jenny had a twin sister, Sandra, who has left her the house. Why had she never heard about her before?
Isabelle Broom cleverly reveals the relationship between these two to the reader in tantalising letters added to the end of some of the chapters which Holly eventually finds. Also she discovers a map of the island, drawn by the sisters of all their happy places, so their life on the island can't have been all that bad. What happened to change their relationship?
Of course, she has a gorgeous neighbour in Zakynthos, Aidan, an Irish vet, who takes her to some of these places. She is attracted to him, but wants to solve the mystery of her mother and aunt more than anything else, so goes off on a moped that one of the islanders, Nikos, lends her.
All the characters are beautifully drawn from Kostos at the local store, to Phelan, Aidan's dog.
It's a wonderful story of Holly's exploration of the island and her own life, where she comes to terms with the past and can look forward to the future, but will it be with Rupert or Aidan? In London, or the magical Greek island of Zakynthos?
It's very popular at the moment to write about girls returning to, or inheriting, a house and uncovering family secrets, but this is one of the best I've read.

Email ThisBlogThis!Share to TwitterShare to FacebookShare to Pinterest
Labels: 'Greek island', 'Isabelle Broom', 'My Map of You', 'sisters', 'twins', Zakynthos'