The Little Theatre by the Sea by Rosanna Ley - a Fabulous Summer Read! 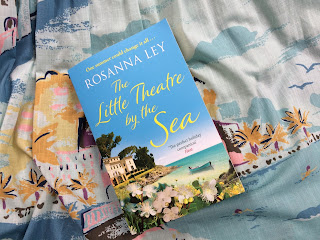 My summer reading is well underway with the new book by Rosanna Ley, The Little Theatre by the Sea, set in beautiful West Dorset and Sardinia.

Faye, unattached and with a new degree in interior design, is invited to house-sit in Sardinia, by her friend, Charlotte, whilst she and her hotelier husband go to Italy for a month on a business trip. It sounds like a wonderful idea to spend a month in the sun, but what Charlotte doesn't tell her until she gets there is that the Alessandro Rinaldi and his sister, Marisa, are looking for someone to renovate the town's Little Theatre. She also doesn't let her know about the animosity in the town towards the Rinaldis and their plans, especially from Pasquale de Montis, an elderly actor, who does not want the theatre to change in any way, and Enrico Volti and his friends, who contest the Rinaldis' ownership of the theatre in the first place.
The story is all about secrets and relationships: secrets that the people of Deriu keep from Faye, and each other, and the secrets that her parents have kept from her, and each other too, as well as the complex relationships between all the characters. For example, the fledgling relationship between Faye and Alessandro, and the failing relationship between her parents, Ade and Molly; the deep love Pasquale felt for Sofia, Alessandro's and Marisa's mother, and the rejection he has never got over when she married Bruno Rinaldi; and the parental love between Enrico and his lost daughter, Giorgia, and the strained love between Pasquale and his even more elderly mother, Dorotea.
One of Rosanna's many writing skills is to make the setting an integral part of the story, contrasting the hot emotions of the people who live in sunny Sardinia, with the cooling of the relationship of Faye's parents back in England; and the decay and demise of the Little Theatre representing the breakdown in friendships, and the renewal of the theatre as a new beginning.

This is a fabulous summer read, whether you're headed to Sardinia or West Dorset for your holiday, or enjoying it in the back garden with a cup of tea !