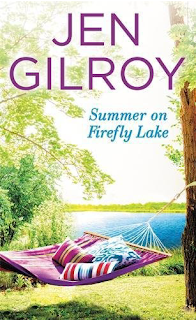 Many of us have rented a holiday home for two weeks by a lake or beside the sea, but how many of us wonder about the lives of the people who live there all year round, or the visitors who stay so regularly that they become part of the community and therefore inextricably intertwined with them?
Jen Gilroy paints a beautiful picture of the seasons in Vermont, in the second novel of her trilogy, Summer on Firefly Lake, and the lake itself becomes almost another character in the story, reflecting the actions of the people involved in and around it.
You don't have to have read her first book, The Cottage at Firefly Lake, because each stands alone, but that one centres on Sean and Charlie who rekindle their love after twenty years, and this one concerns Nick, Sean's friend, and Charlie's sister, Mia, although Sean and Charlie do appear!
Nick is a high-flying lawyer in New York. He is back at the lake to help his mother sell the family home, Harbor House, after her illness, and move into a bungalow as fast as possible so he can return to the big city on Labor Day.
Mia is settling at the lake with her daughters, Naomi and Emma, to be near Charlie because her husband, Jay, has gone off with a younger woman.
Neither want a relationship: Mia, because of the way Jay has treated her, and Nick, because his wife Isobel left him too, but as the summer progresses they begin to fall in love, but will it be the sort of love that will make them want to stay together forever?
Gabrielle, Nick's mother, also falls in love with Ward, a man who is visiting the lake to make a wildlife film, and it is touching to see people in their sixties facing the same problems of commitment as the younger ones.
Another key character is Kylie, a twelve-year-old who has spent her life in foster care.  Her social worker has arranged for her to spend some time at Camp Rainbow which has been set up in the cottage that belonged to Mia and Charlie's mother. When Mia and Nick take an interest in her, she tries to keep them together, just like Gabrielle does because to her Mia is the perfect woman for her son.
Nick and Mia do appear to be a perfect match, but it becomes clear that events in their teens are keeping them from each other too. Will they be able to let go of the past and their desire for independence and freedom, or will they find independence and freedom together at Firefly Lake?
I really enjoyed Jen Gilroy's deep and loving story which explores the love between lonely adults, the love between a son and his mother, and the love that can be shared with a lonely child.
I'm looking forward to her third book, Back Home at Firefly Lake. It's out in the UK on December 28th 2017, and it's got snow on the cover! Perfect for reading after Christmas!