Follow The Road to Little Dribbling with Bill Bryson and Bill Turnbull! 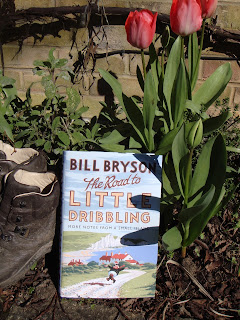 Over the years, I've enjoyed Bill Bryson's books set in Britain, America and Australia, so I was excited to see this new one: The Road to Little Dribbling. Its subtitle is More Notes From A Small Island, referring to the book he wrote twenty years ago about a trip around the country that he's adopted as his own.
He starts off writing in his distinctive style about how he got hit on the head by a parking barrier in Deauville, France, and in the days that followed as he got over it, started to wonder which English town was on the other side of the channel; it was Bognor Regis. This led him to decide to travel 'The Bryson Line' from Bognor to Cape Wrath to see what had changed since his trip in the 1990s.
The Bryson Line is merely a guide as he wanders from east to west, visiting places that take his fancy, all the way giving us many pieces of interesting information. For example, did you know that England has five different kinds of counties, or that Bryson lived next door to Ringo Starr for six months without even knowing it? But, I think, as he travels about the country, he gets more frustrated with the way things are going downhill, especially as he was President of the Campaign to Protect Rural England from 2007 to 2012, and at the beginning of the book, is about to take the test to become a British citizen! 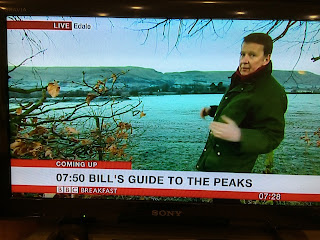 One weird thing happened on the morning of the 24th February. I'd just been reading about Bill Bryson's visit to Kinder Scout in the Lake District, the scene of The Mass Trespass in 1932 in which workers from Manchester and Sheffield walked over the moors in defiance of the Duke of Devonshire who had closed the land to them for his grouse shooting, and which led to the first National Park, when I turned on BBC Breakfast to find another famous Bill: Bill Turnbull, actually in the Peak District, talking about The Mass Trespass itself. I couldn't believe it!
The Road to Little Dribbling is an entertaining read, packed full of information, and I hope you will enjoy it as much as I did.
Which is your favourite Bill Bryson book?