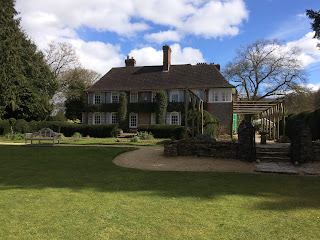 This Easter, I visited Nuffield Place, near Oxford, the home of William Morris, not the nineteenth century textile designer, but the twentieth century William Morris who became Lord Nuffield, the motor manufacturer and philanthropist.
As he had no children, upon his death, his house and gardens were left to Nuffield College, Oxford, one of the many institutions he set up, to be opened to the public throughout the summer. However, the costs of upkeep proved too much and it has now been taken on by the National Trust. A visit is fascinating because it is a time capsule of his life there from 1933 to 1963. 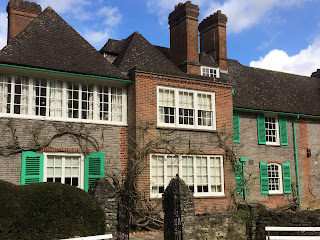 Amongst dressing tables, bedecked with crystal bottles and pots, and lace doilies, there is his wardrobe, full of tools!
And in contrast to cupboards full of ceremonial robes, there's Lady Nuffield's sewing box, made from a Huntley and Palmers tin, rather like the one I've been using for years! 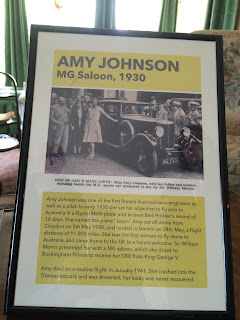 Around the house there are framed images of famous people who have driven Morris cars, like Elvis Presley, and Agatha Christie, but the most exciting for me is Amy Johnson, who features in my novel, Gipsy Moth, which is about a girl who dreams of becoming an aviatrix like her.
In 1930, Amy Johnson was presented with a MG Saloon, by Sir William Morris, as he was then, on her return from her record breaking solo flight to Australia, and she drove it to Buckingham Palace to receive her CBE from King George V!