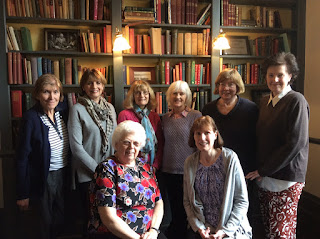 This week I was invited to the Reading RNA lunch at the Great Expectations Hotel.
Here, you can see the lovely writers who welcomed me and made the event so enjoyable as we chattered about all things to do with writing, publishing and promoting our novels. 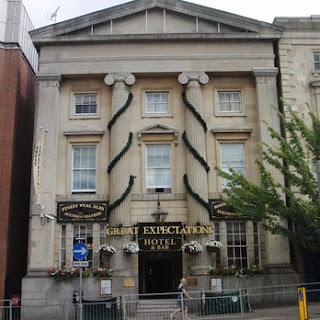 The Great Expectations Hotel is named after the famous book by Charles Dickens. The building with its distinctive Greek columns was originally called New Hall and was built in 1843 to house the Literary, Scientific and Mechanics Institute. So already there is a literary link, as these institutes provided lectures and a library for the working classes.
However, due to lack of funds (despite a £10 donation from Prince Albert), in 1853 it was converted to a theatre by a Mr T Fry. A new proscenium arch was constructed and it became Theatre Royal New Hall.
Finally, on December 19th 1854, Charles Dickens himself, came to read an excerpt from A Christmas Carol and he was said to be 'overcome' by the warm reception of Reading's working class citizens.

In an article by Simon Callow, who is renowned for his readings of the work of Charles Dickens in the style of the great storyteller, he tells of the great performances Dickens made.

'The Readings were the great theatrical sensation of the day, both in Britain and in the United States of America. He staged them very carefully, building up the audience’s anticipation until he finally made his entrance, to ecstatic acclaim he was not only the most famous author of his day, he was the most famous man, and his readers loved him deeply. When he took his place at the reading desk he had designed, his face framed by gaslight, the audience fell silent; his command was absolute. Not only was he a superb performer, in both tragic and comic sequences, moving the audience alternately to gales of laughter and deep sobs, but his connection with his listeners – who adored him, feeling, as they had always done, that he spoke for them – was palpably intense, the applause at the end thunderous and never-ending.'
- See more at: http://www.bl.uk/romantics-and-victorians/articles/dickens-the-performer#sthash.gkrDTH8v.dpuf

So there we are, a literary lunch at the former Literary, Scientific and Mechanics Institute which became the venue for a reading by the most famous author of the nineteenth century.
Posted by Jean Bull at 15:29