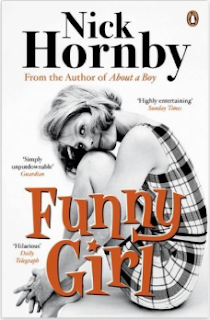 Have you ever watched those classic sitcoms from the 1960s: To Death Us Do Part, Steptoe and Son, Hancock's Half Hour? Or from America, I Love Lucy, and wondered about the lives of the stars and writers behind them?
Funny Girl by Nick Hornby is set against the backdrop of the BBC and tells the tale of Barbara Parker who within minutes of being crowned Miss Blackpool, is handing over her tiara and leaving for London. Her favourite television star is Lucille Ball, and she dreams of being just like her.
After some unsuccessful auditions, Barbara's agent, Brian, helps her by giving her a Voice Improvement Programme record so she doesn't sound so northern, and suggests she changes her name to Sophie Straw. 'Rather like Sandie Shaw', he explains.
After more disastrous auditions, he gives her the script for a new Comedy Playhouse production, called Wedded Bliss? (Yes, it really does have a question mark.) It's written by the fictitious Tony Holmes and Bill Gardiner who, together with junior producer, Dennis Maxwell-Bishop, have had a very successful radio comedy show, starring Clive Richardson who is to star in their new TV show. But when Sophie says she doesn't think Wedded Bliss? is very funny, they decide to write a new show starring her as Barbara from Blackpool and Clive as Jim who works at Number 10. The new show would have it all: the North/South divide; the class system; politics; relationships; and a new star in the shape of the ex-beauty queen from Blackpool! Oh, and much to Clive's disgust, it's to be called Barbara (and Jim)!
The book is an entertaining account about life at the BBC in the Sixties, which also contains some fascinating black and white photos of the stars and writers of the time. I can thoroughly recommend it.