How Paul McCartney, CS Lewis, and Reading on the Toilet got me into Writers' Forum this month! 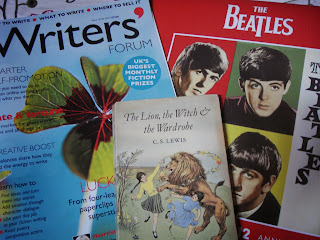 It's been a good writing week for me in Writers' Forum: I've been mentioned three times!
Recently, Paula Williams was asking for writers to tell her about how their day job had inspired a story or a novel for her 'Ideas Store' column.
I wrote in and told her how working at a hotel where The Beatles had stayed in 1963 had prompted me to write about fourteen-year-old Molly who wanted to tell Paul McCartney that she loved him. (You can find out what happened in my collection of summer short stories, Postcards and Suntan Cream!)
I was really pleased to see that Paula had included my story. It was quite funny because a few years ago, I heard about her column and how it could inspire you to write and so I became a subscriber to the magazine. Now here I am in it myself!
There has also been a series by Douglas McPherson, helping you to break into non-fiction article writing. I never thought that I could do it. However, one day I watched The Lion, the Witch and the Wardrobe on TV, and remembered that CS Lewis had died 50 years ago, in November 1963, so began to write an article for practice. I saw that a free magazine had a few articles each month of local interest, and so, because Lewis lived in Oxford for many years, I pitched it to the editor. I was thrilled to be asked to write 500 words and afterwards told it would be in the November issue. On the back of this, I decided to write a letter to the 'Writers'Circle' letters page about it, and they printed it as well!
Lastly, I saw an article in the Metro newspaper reporting on a survey that said that one in 10 men and one in 30 women read their books on the toilet. It also went on to talk about the British people's lack of knowledge of Shakespeare and Dickens. I wrote it up for the 'Newsfront' digest and got it published too with my own byline!
I just shows what you can do, if you look for opportunities and act on them!