An Enormously English Monsoon Wedding - A very romantic story bathed in sunshine and kisses, or a clash of cultures catastrophe? 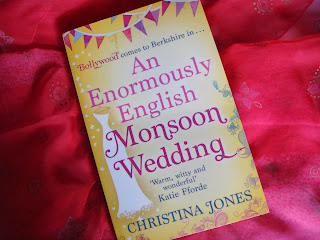 Dot Scribbles has been looking for some guest volunteers to review books on her excellent blog. On her list was An Enormously English Monsoon Wedding by Christina Jones; one that I had planned to read because its tagline was ‘Bollywood comes to Berkshire’ and it sounded crazy and exciting, so I was very pleased to be chosen!
Christina Jones has written a very romantic story bathed in sunshine and kisses which makes you hope that it won’t turn out to be a clash of cultures catastrophe!
Erin fell in love with Jay, Nook Green’s village vet, when he saved the life of her beloved cat, Florence. Now two years later, they have planned the perfect wedding at the Swan Hotel. And there’s only six weeks to go. They’ve chosen a civil ceremony so as not to upset either set of parents, and Erin has chosen the most beautiful dress. As they stroll through the hotel grounds to meet Jay’s parents, Deena and Tavish, everything in the garden is lovely, until lunchtime when his mother starts to question their plans and makes it clear that she expects them to have a more traditional Indian wedding. On top of this they have brought Nalisha, Jay’s childhood sweetheart, with them!
The village has some other memorable characters: Kam, Jay’s cousin and also a vet; Gina who runs the Merry Cobbler; Uncle Doug who owns The Old Curiosity Shop where Erin works; and Erin’s parents, Rose and Pete, who arrive from Australia. I particularly like the part when Deena takes Erin and her mother to buy Rose a wedding outfit.
Christina grew up in a similar close-knit Berkshire village, and has recently been involved in her daughter’s fusion wedding which, she says, went more smoothly than Erin and Jay’s! Therefore, she had lots of material to base her story on which makes it ring true.
It’s difficult to write about this book without giving too much away. Christina describes it as a ‘Bucolic Frolic’, and it is romantic and funny: perfect to read on holiday or at home by a roaring fire. I really felt for poor Erin and Jay and I was gripped by the story, which has some surprising twists and turns and Bollywood moments, to find out whether Deena gets her way or not.
This is the first book that I’ve read by Christina Jones. She’s writing three more in this series, set in the surrounding fictional Berkshire villages she mentions in this book, and I will certainly be looking out for them.
This review is being published simultaneously today on both our blogs. If you haven't seen Dot's blog yet, it's well worth going over and having a browse at the wide selection of books that she's reviewed. Here's the link:)